A superb Hamilton Masakadza century has led the Zimbabwe fightback against Bangladesh on the third day of the second Test in Khulna.

Regis Chakabva provided ample support to him with an unbeaten half-century to help his side try to knock off the deficit on Wednesday.

Zimbabwe were 331 for five at the close of Day Three at the Sheikh Abu Naser Stadium, still trailing the hosts by 102 runs.

Masakadza (154) and Chakabva (75) were at the crease having already added an unbeaten 142 runs for the sixth wicket. Both have made their career-best scores in the process.

The Africans started the day on 51 for one.

The hosts were let down by two dropped catches, both of Masakadza’s, right at the outset.

Both catches were dropped by Shamsur Rahman at slips with the batsman on 15 and then on 19.

Initially, Shakib Al Hasan could not exploit the slow Khulna pitch to his advantage but then he adjusted his line to middle and off.

Masakadza and captain Brendan Taylor (37) added another 67 runs. As Shakib slid one in, the latter fell to a great catch by Mominul Haque at short leg.

Then the allrounder also took out the visitors’ middle order dismissing Craig Ervine (17) and Elton Chigumbura (1) in quick succession to reduce the tourists to 189 for five.

Masakdza held one end firmly and paired with Regis Chakabva for the recovery.

Masakadza cut Shakib to third man and brought up his fourth Test hundred. He hit 17 boundaries and two sixes so far.

Zimbabwe, 231 for five at tea, comfortably moved ahead in the final session with Chakabva scoring his second Test fifty. He and Masakadza added 100 runs in the last session of the day.

Bangladesh’s pick of the bowlers was Shakib who snared three wickets for 70. Taijul bagged the other two wickets.

On Tuesday, Tamim Iqbal and Shakib scored centuries in distinct fashions to help Bangladesh pile up 433. 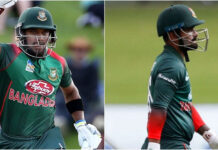 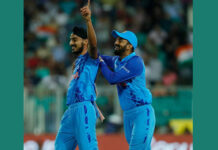 Tamim to play against Tendulkar, Lara at Lords

Domingo focuses on Test in the year 2020

Mustafiz in top 5, Shakib still the no.1 T-20 all-rounder