Once Moudud Ahmed defended the country’s independence leader, but now he is sick and in jail as the prime minister cracks down on opposition ahead of January’s national elections 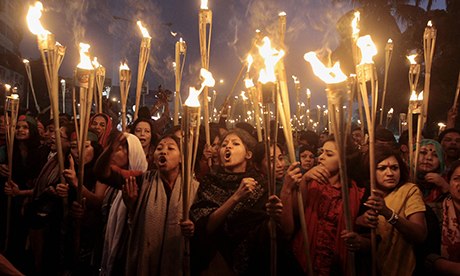 On a moonless night in 1971 Moudud Ahmed led me clandestinely into what was then East Pakistan – and is now Bangladesh – past villages that the Pakistani army had raped and razed. The war of liberation was under way; Moudud was a young lawyer who had defended the Bengali independence leader Sheikh Mujibur Rahman. When Bangladesh was declared that year, Moudud brought a rally to its feet when he held up the front page of the Daily Mirror, which carried my report beneath the headline: BIRTH OF A NATION. “We are alive, but we are not yet free,” he said, prophetically.

Once in power, Sheikh Mujib turned on his own democrats and held show trials at which Moudud was their indefatigable defender until he himself was arrested. Assassination, coup and counter-coup have since seen Moudud revolve between prison and parliament. He once won a parliamentary seat from prison. In the 1980s he was prime minister. It is fair to say that Bangladesh’s short life has been blighted by almost perpetual conflict between feudalists and democrats and, more recently, fundamentalists.

National elections have been called for 5 January. The prime minister since 2009, Sheik Hasina – the daughter of Sheik Mujib – has been accused of manipulating the electoral process to establish a one-party state. The announcement of elections coincided with the arrest of six leaders of the opposition Bangladesh Nationalist party, including Moudud. Under investigation for tax evasion and inciting attacks on police, they have been refused bail, which means they cannot stand in the elections. Framing political opponents in order to silence them is a familiar game.

Moudud is suffering from a pituitary tumour. His wife, the poet Hasna Jasimuddin Moudud, once told me: “The country is a prison, and the world must know.”

Sheikh Hasina recently appointed herself law minister and home minister. This means that the final decision on whether the leadership of the parliamentary opposition stands against her Awami League or languishes in prison is hers. The opposition leaders have already missed the registration date, which was shortly after they were arrested. At the very least Moudud, who is ill, ought to be released now.

How far has Awami League come?