The Supreme Court may have five more dates left to hear the appeal of Motiur Rahman Nizami challenging his death penalty for war crimes.

The court said it will hear argument from Nizami’s defence from November 30 to December 2 while from the attorney general on December 7.

Then, the apex court will hear the reply from the defence on December 8.

A Lawyer, who was present at the courtroom today, sought anonymity to tell The Daily Star that the SC may fix the date for delivering verdict on Nizami’s appeal after holding hearing on December 8. 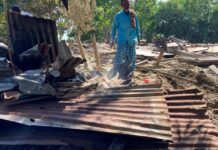