Mashrur Arefin, managing director and CEO of The City Bank Ltd, says at The Daily Star’s The Chief Executive Show powered by Marico

Every leader has his time in the sun, and it is all about reinventing the sunlight when it is gloomy. Eclipse comes from complacency, and people suffer from inertia if there is no challenge in life.

This is the takeaway for Mashrur Arefin, managing director and chief executive officer of The City Bank Ltd, from his 26-year-long career in the banking industry, at home and abroad.

According to him, a value-driven culture is vital for the entrepreneurial spirit of a company to glow.

“In such a company, being result-driven, courageous and bold are parts of the culture so that people can participate in the decision-making process.”

On the other hand, internal bureaucracy slows down a company, and it must be cut down to keep the spirit alive.

“After a successful period, there come inertia and senselessness of purpose. And in bad company culture, come disrespect and non-recognition that eat up the entrepreneurial spirit.”

Arefin believes a democratic, participatory leadership framework is important and says during tough times, every decision must be participatory and never be dictatorial.

“This way, everybody will own the decision. In a team, if everyone fights together, no challenge is challenging,” said Arefin, who’s been leading the fast-growing private commercial bank since January 2019.

After completing MA in English from the University of Dhaka, he started his career with ANZ Grindlays Bank in 1995 as a management trainee.

He played a key role in City Bank’s transformation. He became a deputy managing director before appointed to the top job more than two years ago.

Arefin said difficult times might come today or tomorrow, and there’s no panacea to them, as every challenge was unique in its own time and space.

He advised young corporate executives to remain calm during challenging times, consult with seniors, and think inside what one is getting and losing.

“The rest is your courage. Without courage, one takes the wrong decision. Also, fear eats up one’s soul.”

Arefin believes that there is an acute crisis in the country’s cultural maturity level where everyone wants to become a boss, not a leader.

“A good institution must have an institutional framework so that no one can become a powerful boss. A leader is always compassionate towards his people, and there must be transparency in performance assessment.”

If there’s no compassion and care, one will become a boss and explore himself in the dustbin of the corporate world someday, he said.

For him, creating shareholder value lies at the core.

The right decision-making process is essential through cost-benefit analysis from all angles, as some decisions help earn revenue and some build brand equity, he said.

“If the desired return is not attained due to the lack of business discipline, there raises the question of accountability.”

Founded by 12 young businessmen in 1983, City Bank has 132 branches and serves 18 lakh customers.

The bank has thrived over the years. But Arefin believes the banking environment in the country is tough.

One of the challenges facing the banking industry stems from the capping of the interest rate at 9 per cent on loans just before the pandemic hit the country.

“It affected around Tk 350 crore worth of business for City Bank.”

During the pandemic, the government has introduced a loan holiday, which has continued. Banks are suffering due to non-payment of instalments.

“When everything comes to normal, will people get back to their repayment habit?” he asked.

The pandemic has affected City Bank’s card business, where it holds the majority of the market share, at 38 per cent.

“The card business is slowly picking up as people are moving to e-commerce,” said Arefin, who is credited for the launch of American Express cards in Bangladesh.

The pandemic has brought on many changes, but the noted banker is hopeful because of the initiatives such as real-time cash machine and the country’s first digital loan through bKash app.

“We’re trying to counter the challenge through innovation and stay connected with people. We have done well during the pandemic.”

Arefin is a poet, writer and translator, as well.

He started writing in the early 1990s, and his first poetry book, Ishwardi, Mayor O Mule er Golpo, was published in 2001.

His translation titled ‘Complete Stories of Franz Kafka’ won the ‘Brac Bank-Samakal Literary Award’ in 2013 and was adjudged the year’s ‘Best Publication’ by the Bangla Academy. His translation of Homer’s epic ‘The Iliad’ was also well-received.

His other literary works are the translation of the novels Althusser and Underground and poetry books Prithibi Elomelo Shokalbelay and Poristhiti Jehetu Agun Hoye Achhe.

After his day’s job, he steps into his library and spends around four hours a day. On weekends and holidays, he would devote 10-12 hours.

“If there is passion, everything possible,” Arefin said.

“One should think about the key purpose of life. If you want to be something, ask whether it is for yourself or the community? Try to see it from the bigger space.”

He says banking and writing were way too different, and hard to keep them aligned.

“But banking gives me financial stability so that I can buy a lot of books and don’t feel the financial stress.”

Arefin, who completed an MBA from Victoria University of Australia and higher management courses from INSEAD in France, asks the young generation to take care of three aspects if they want to succeed.

“One must know the difference between a job and a career. Understand the purpose that defines you and makes you relevant. Finally, remember that good institution doesn’t hire people for knowledge, but based on aptitude, attitude, hunger for learning, zeal, bravery, and character traits.” 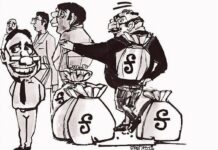