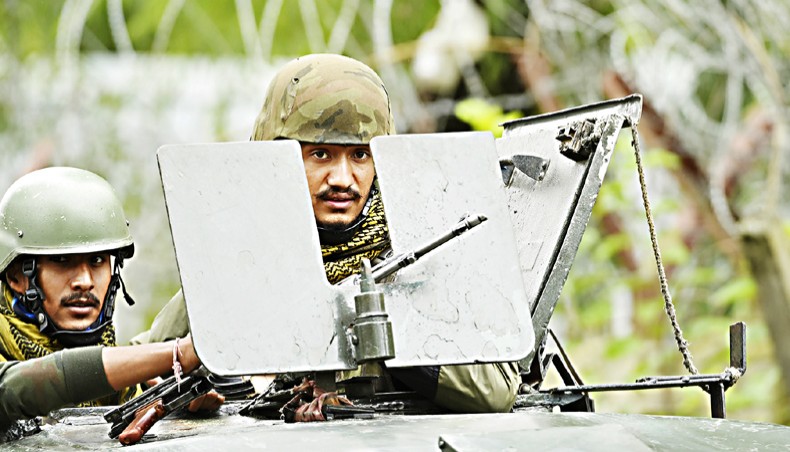 Indian army soldiers stand guard atop a vehicle near the site of a gunbattle between suspected militants and government forces at Yadipora village of Pattan area north of Srinagar on September 4. — Agence France-Presse/Tauseef Mustafa

A REALLY independent state should strive, first and foremost, to build up the state’s institutions and promote the welfare of its people. It must not allow itself to be trapped in disputes with the neighbours. If they do arise, it should strive to settle them, not aggravate them. To do so otherwise would be to stoke tensions and create unnecessary rivalries.

But the experience in South Asia in this respect has been saddening. Some disputes are inescapable. But instead of trying resolutely to resolve them, they are used for political mobilisation to buttress the party in power by all parties concerned.

In this exercise, maps come in handy, both in confrontation with the foreign adversary and in domestic politics. This is a sham pursuit.

In law, maps are worthless as proof of title to territory. They are not documents of title at all.

The observations and rulings of the International Court of Justice are helpful, and this writer has quoted them earlier in other publications as well. The case of the 11th-century Preah Vihear Temple, as well as that of frontiers in Africa, bear repeating. The temple is at the centre of a dispute between Cambodia and Thailand, and competing territorial claims and nationalist sentiments have seen clashes between the two countries, even after the ICJ ruling in the 1960s. Cambodia won its case on the Preah Vihear Temple because Thailand had, ‘by its conduct, accepted a crucial map though in its inception and at the moment of its production, it [the map] had no binding character.’

In the 1980s, the ICJ ruled on the case of the border dispute between Burkina Faso and Mali. It stated: ‘Whether in frontier delimitations or in international territorial conflicts, maps merely constitute information which varies in accuracy from case to case; of themselves, and by virtue solely of their existence, they cannot constitute a territorial title, that is, a document endowed by international law with intrinsic legal force for the purpose of establishing territorial rights.

‘Of course, in some cases, maps may acquire such legal force, but where this is so, the legal force does not arise solely from their intrinsic merits; it is because such maps fall into the category of physical expressions of the will of the State or States concerned.

‘This is the case, for example, when maps are annexed to an official text of which they form an integral part. Except in this clearly defined case, maps are only the extrinsic evidence of varying reliability or unreliability which may be used, along with other evidence of a circumstantial kind, to establish or reconstitute the real facts.’

Crucially, it noted that ‘…except when maps are in the category of a physical expression of the will of the state, they cannot in themselves alone be treated as evidence of a frontier since, in that event they would form an irrebuttable presumption, tantamount, in fact to legal title.’

Indian Customs routinely stamp these words on maps in foreign journals: ‘The external boundaries of India as depicted are neither accurate nor authentic.’ The Economist of London has regularly put this comic device to ridicule. It provides the key words to the full exposure of the map on the internet. India has enacted two statutes to ensure legal bans on maps that do not toe the official line.

According to India’s Criminal Law (Amendment)) Act, 1961, the state can imprison anyone who ‘questions’ the territorial integrity of India whether by ‘words’, spoken or written, or by ‘visual representation’ or by ‘signs’. The Criminal Law (Amending) Act, 1990 states: ‘Whoever publishes a map of India, which is not in conformity with maps of India as published by the Survey of India, shall be punishable with imprisonment which may extend to six months, or with fine, or with both.’

The 1961 law requires proof that the map’s publication is ‘likely to be prejudicial to the interests of the safety and security of India’. The 1990 act dispenses with such niceties.

It is hard to see how any map, or for that matter any writing, can upset a country’s sovereignty. That surely depends on the facts of history and the country’s military strength. The effect of the government’s stance is to stifle free speech on sensitive issues such as Kashmir and the boundary question.

Citizens have the right to say that Kashmir is a disputed region and that the northern boundary is wrongly depicted in official maps. Laws that do not uphold this right are unconstitutional.

The expression ‘cartographic aggression’ is puerile. Maps have some evidentiary value only if published before the dispute arose.

After its statutory rape of Kashmir on August 5, 2019, India published a new map on November 3, 2019, depicting the result of that statutory crime. Both acts violate the Shimla Pact which says, ‘Neither side shall unilaterally alter the situation.’

Dawn.com, September 5. AG Noorani is an author and a lawyer.