Prime minister Sheikh Hasina on Thursday handed over the Independence Award 2017, the highest state award, to Bangladesh Air Force and 15 distinguished personalities in recognition of their outstanding contributions to their respective fields.

The prime minister handed over a certificate, an 18-carat gold medal weighing 50 gram, and a Tk 3 lakh cheque to each of the recipients and their representatives at a function at the city’s Osmani Memorial Auditorium.

Cabinet secretary Mohammad Shafiul Alam conducted the award-giving ceremony and read out the citations of the awardees.

Later, on behalf of the award recipients, Professor Enamul Huq shared their feelings with the audience upon receiving the award.

Ministers, state ministers, advisers to the PM, members of parliament, diplomats, high civil and military officials were present on the occasion. 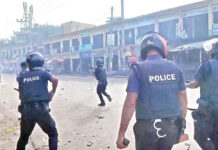