Passengers, overcharged, in packed transports brave all ordeals to celebrate Eid-ul-Fitr with near and dear ones 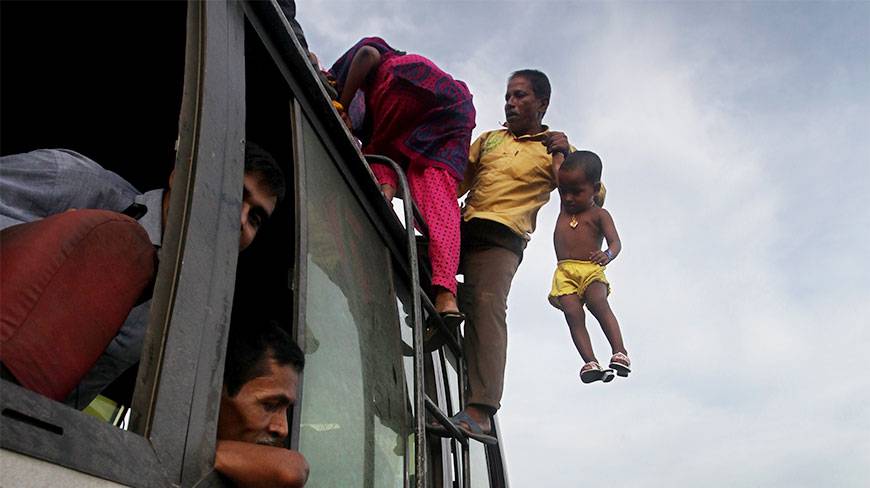 Travelling home on highways, waterways and rail did not remain much trouble-free yesterday with a day or two remaining ahead of Eid-ul-Fitr as the increasing number of home-goers faced ordeals to get transport as well as heavy traffic on the highways.

Yesterday was the last working day ahead of the Eid. And so the rush of home-bound passengers was much higher than the last few days.

Those who decided to go home in the last minutes and could not book tickets in advance had to undergo hassles to start for home.

Cashing in the heavy rush, the transport providers increased fare several folds. But they failed to provide transports on time. Defying the government directives, passengers were seen travelling on the roofs of trains and buses and top decks of launches braving risks of accidents.

“Madaripur! Barisal! Chapai! Rajshahi! Rangpur! Seats available!” bus staff were shouting at Gabtoli bus terminal yesterday. However, they actually did not have arrangement of buses as most tickets had been sold out beforehand.

To cater the extra passengers, the operators arranged local and city buses, most of which are unfit, to earn some extra money.

Such situation was seen at the Gabtoli, Sayedabad and Mohakhali bus terminals and Gulistan area of the capital.

The passengers who booked tickets earlier also had to suffer as their designated buses reached the capital much later than scheduled time.

Even though the city saw less traffic yesterday, there were reports of traffic jam at different points – Gazipur Chourasta to Chandra, and Savar and Baipail Bridge areas. The police, however, claimed that it had been temporary jam caused due to the garment workers who leave workplace in the afternoon.

Asked why they were charging the passengers higher amount for tickets, conductor of a bus Salam said: “We have to return to Dhaka with less or no passengers. It will be a heavy loss for us. Moreover, we are taking some extra money as our Eid bonus.”

The main transport system for the south-bound passengers from Dhaka is launch service. The Sadarghat launch terminal witnessed huge crowd yesterday, especially in the evening.

The passengers were seen suffering to manage room inside the vessels and for this many grabbed a small space on the rooftop. Every launch carried passengers on rooftops.

To get on their launch, many passengers went to the terminal hours before the schedueld time.

According to the authorities, as many as 72 launches left the terminal to 41 destinations until 7pm while more than 30 were supposed to start by midnight.

Passengers, however, alleged that there was shortage of vessels to Amtoli, Bhola and Barguna routes.

“Some launches which left the terminal on Saturday could not return to Dhaka timely. The current pressure of passengers will be minimised after they return,” said Siddiqur Rahman, an official of the BIWTA.

Meanwhile, some passengers vandalised furniture, lights and signboard of MV Flotila, Patarhat and Farhan 4 as the launches had not left the terminal at scheduled time. Later police came and brought the situation under control.

Though it was announced last Friday that all the tickets for cabins had been booked, some staff were seen selling tickets in triple price. They had allegedly grabbed the tickets much before the launch owners started selling the tickets.

A youth at the terminal offered tickets for single and double cabins of Anchal 5 and 6 launches. He demanded Tk2,000 for a single cabin and Tk3,000 for a double.

Normally, a single cabin of launches in Patuakhali route costs Tk800 while Tk1,400 for a double cabin.

The passengers opted for trains with a view to enjoy rick-free travel had to face ordeals at the Kamalapur Railway Station since the trains could not start on time.

The schedule disruption was acute in the afternoon.

The Rajshahi-bound Silk City was supposed to leave the station at 2:40pm. But it could not come to the station until 5:30pm.

“This train left Kamalapur on Saturday one and a half hours after scheduled time,” said Kamrul Hasan, Dhaka Division railway’s manager.

Besides these, Upakul Express and Subarno Express were also late.

“This schedule disruption happened due to extra pressure of passengers. It needs extra time for additional passengers to get on the trains during the rush hours,” he added.

Like the previous times, there were many passengers on the rooftop yesterday defying high risk of accidents.

1 million garment workers out of work in Bangladesh

Do we have enough ventilation facilities?