Comilla Victorians put up a clinical performance to crush Sylhet Superstars by 71 runs and finished the league phase of the Bangladesh Premier League at the top of the table on Thursday.
Batsmen gave a good account of themselves to take Victorians to a commanding 150-4 before some controlled bowling by bowlers helped them fold Superstars for 79 runs in 13.5 overs.
The result ended any outside chance Superstars had to qualify for the last four as they finished the tournament at fifth place with six points from 10 matches.
It also confirmed Dhaka Dynamites’ place in the semi-final before they took the field against Barisal Bulls, making the second match of the day irrelevant for the side.
Victorians have their own reasons to push for a big win as they were looking for a top-two finish that would give them two chances to qualify for the final.
Mashrafee bin Murtaza, the inspirational captain of Victorians, who did not bowl or bat and yet his presence felt during every stage of the game, however, said initially they were just looking for a win.
‘We just wanted to win it initially, did not bother about any other equation,’ said Mashrafee. ‘It (win by a big margin) only came to our mind when we were told that if can win the match by 50 runs, we will be on top.’
Mashrafee got more than what he had expected as Superstars could not offer any challenge despite opener Joshua Cobb making an aggressive start with 21 off 18 balls.
Among the other batsmen only Junaid Siddique (10) and Mominul Haque (15 not out), who batted surprisingly at number eight, could reach the double figure.
‘I think the plan was totally different,’ said Superstars captain Afridi. ‘But we didn’t play according to the plan. We lost too many wickets in the middle overs from 4-8,’ he lamented.
Suvagata Hom left their top-order in awe with 3-8 before Ashar Zaidi (2-4) made a double strike in his only over to remove Shahid Afridi and Nurul Hasan leaving the side with no chance to fight.
Andre Russell, who is scheduled to leave after the first semi-final, made his presence worthwhile with the wickets of two tail-enders Mohammad Shahid and Rubel Hossain to finish the game off.
Russell had earlier got just one ball to face as barring Liton Das all other top-order batsmen of Victorians made some contributions to give the side a competitive score.
Imrul Kayes made 27 off 28 balls and shared 68-runs for the second wicket with Ahmed Shehzad, who smashed 42 off 31 balls with five fours and a six to win the man of the match award.
Alok Kapali defied his injury to stay unbeaten on 32 off 26 balls while Zaidi, the most consistence overseas cricketer of the tournament so far, added 31 from 29 balls. 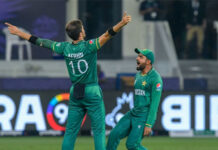 Tigers on a mission against Windies