Raffaele Petralla, a documentary photographer based in Rome, was struck by what he witnessed when he first arrived on the outskirts of Bangladesh’s capital, Dhaka.

“I saw hundreds and hundreds of chimneys around me. It was a landscape of smoke and chimneys,” he said.

Petralla was in Bangladesh to document the brick factories that cluster around Dhaka. The first photo he took, capturing the moment he arrived in spring 2014, shows chimney stacks belching black smoke into a heavy grey sky above a watery but bleak industrial landscape.

He was to stay for two months, living among the brick workers to get a real understanding of their difficult lives.

“Near each factory there was the village of the workers, so there were all the families that work inside the factories,” he said. “The houses were very bad — only 1.5 meters high, so you can’t even stand up inside — and (they were) without electricity.”

To make matters worse, he said, the tin-roofed houses were very, very hot inside, thanks to 100-degree temperatures outside and heat rising from the underground brick furnaces. 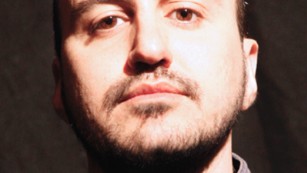 As many as 10 people, often from three generations, would be living in a house measuring only 3 or 4 square meters (33-43 square feet), he said.

One of Petralla’s images, No. 3 in the gallery above, shows five young men inside one of these houses in the Gazipur area. Their faces show little expression, but their shoulders are uncomfortably stooped.

Petralla soon discovered that all those living in the workers’ community had come from other parts of Bangladesh, mostly tiny rural villages far from big cities. They were lured by the promise of decent housing and a wage that would sustain them even in the months when the factories are closed.

One man Petralla met was 19-year-old Saddam. Saddam’s account revealed how many of the workers find themselves trapped in a daily nightmare.

Saddam “told me one day a man came to the village with a very big car, dressed like a rich man, and he promised him a job and also one for all the family if they came with him to the capital city,” Petralla said.

The family decided to go. Some days later, trucks arrived in the village and carried many of its people to the factory.

“They received a promise to have a good job, to have a house, and they could leave after a year of work and go home. But at the end of the work season, they didn’t have any money to go back,” Petralla said.

Just change the name of the village, and Petralla heard the same story over and over again.

And it isn’t just adults who are trapped in the brick factories. With wages kept miserably low, the families need every salary they can get just to survive — and this means children as young as 6 work long hours, too, Petralla said. Their pay is the same as that for adults, based on the number of bricks transported daily in woven baskets loaded onto their heads. Petralla’s images capture some of these children at work, dusty and often barefoot, in the brick fields.

Because many of the brick factories are illegal, Petralla said, the owners are wary of strangers, particularly journalists. So he pretended to be a tourist fascinated by the colors of the bricks, smoke and dust.

When the boss left each day, he stayed with the workers, took out his camera and documented their lives close up.

“They feel like they have a promise to change their lives, their economic position. But in reality, they didn’t have access to medicine, they had money only for food,” Petralla said. Some people fall ill, particularly with respiratory problems. But they can’t stop working or they have no way to live.

“Maybe there’s no way to escape,” Petralla said. “I think most of them are not educated, they are illiterate people, and they don’t know how they can escape from this situation.”

The government has promised to tackle the problem of the brick factories and the choking pollution they produce, Petralla said, but they still continue.

According to a World Bank report last year, brick fields across Bangladesh expel more than 9.8 million tons of greenhouse gases into the air each year “due to a combination of old technology, weak environmental legislation and enforcement and lack of corporate responsibility.”

The website of the Bangladesh Ministry of Environment and Forests outlines plans to cut the fumes emitted from brick fields by introducing cleaner technology and practices, as well as closer monitoring, through the Clean Air and Sustainable Environment Project.

The pollution is causing serious health hazards, Petralla said. The brick kilns spew out vapor that is harmful to eyes, lungs and throats. These pollutants pose a risk to children’s physical and mental development.

There’s also a heavy environmental cost beyond the air pollution the brick kilns cause, particularly since forests are cut down to provide fuel for the furnaces.

Meanwhile, the brick workers serve the rapid development of Bangladesh’s cities. But what, Petralla asks, do they gain from such growth?

“They are only slaves of it, and they cannot use their production,” he said. “It’s pure injustice.”

Jinnah made a mistake and I am ashamed of being Pakistani

Bangladeshi nationalism and secularism in Bangladesh–II