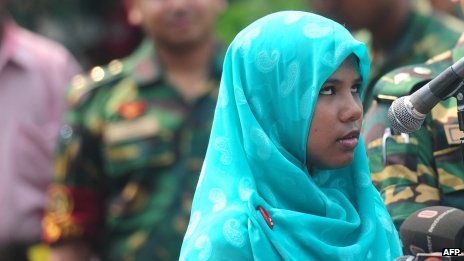 A Bangladeshi seamstress trapped in the rubble of a collapsed garment factory for 17 days has been discharged from hospital and says she is looking forward to a new job in a top hotel.

Reshma Begum, 19, became a national heroine after the tragedy which claimed more than 1,100 lives in April.

“I feel great now. I am recovered mentally and physically,” Ms Begum said after nearly a month of treatment.

She has received various job offers since her remarkable escape.

“I still get frightened in the night,” a smiling Ms Begum told reporters. 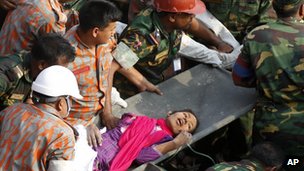 “Whenever I think of those days, I feel bad and frightened. I have forgotten most of what I did under the rubble.”

The teenager survived by drinking rainwater and food foraged from lunch boxes of other workers after the nine-storey workplace collapsed on 24 April.

She has now accepted a job at the luxury Westin Hotel in Dhaka, said Maj Gen Chowdhury Hasan Suhrawardy, the local military chief overseeing her care.

The Westin's manager, Azim Shah, said that she would be deployed in the hotel's housekeeping department as a “Public Area Ambassador”. Hotel officials said she would talk to guests, but did not elaborate on her responsibilities.

Ms Begum said soon after her rescue that she would never return to the accident-prone garment sector, the world's second biggest, worth an estimated $20bn (£13bn) a year.

The teenager, from a remote village in the western border district of Dinajpurhad, had begun work in the building just 22 days before the collapse. She was being paid a monthly salary of 4,700 taka ($60; £38).

More than 3,000 garment workers were on shift at the time of the collapse, most of them making clothing for Western retailers. Before the disaster, they had been told to remain at work despite concerns about cracks on the outside of the complex.

The industry has since promised to clean up its act. Most major European buyers have signed a new accord which promises better conditions for workers, as well as more frequent fire and building inspections.