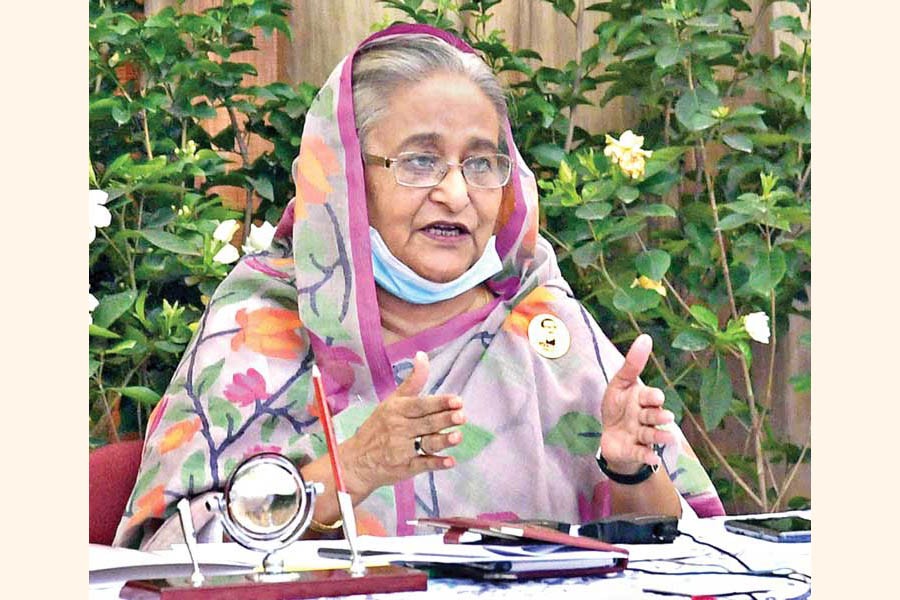 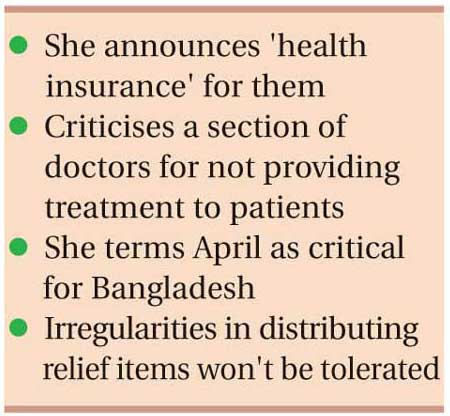 The government has decided to give incentives for doctors, nurses, health workers and other employees of the Republic who engaged themselves with bravery in the war against COVID-19, Prime Minister Sheikh Hasina announced Tuesday, reports UNB.

“I want to reward those who have been involved directly in the fight against COVID-19 since March,” she said.

The Prime Minister said this while delivering her introductory speech in a video conference with the public representatives and public officials from 15 districts of Chattogram and Sylhet divisions from her official residence Ganobhaban.

She said the government would give special incentives to encourage them.

Apart from the incentive, the Prime Minister said, there would be a health insurance worth TK.0.5–1.0 million for them if they are infected with COVID-19 while discharging their duties. If anyone dies, the amount of health insurance will be five times higher,” she said.

“But remember that the incentives will be applicable for those who have been working against the COVID-19 since March putting their lives in danger,” she added.

The Prime Minister said if any employee of the Republic is infected with COVID-19 while performing duties, the government will bear all the treatment costs for him/her,she said adding PM informed that she has already spoken with the finance minister and the finance secretary in this regard.

“I’ve already instructed to prepare a list in this connection. We need to encourage them and we want to honour them,” she said, adding that those who did not engage themselves in war against COVID-19 will not be eligible for the incentives.

She criticised a section of doctors for not providing treatment to patients on the pretext of keeping themselves safe from COVID-19.

“This incentive is not for those who fled for their own safety and left patients going from door to door for treatment,” she said.

Regarding any condition from doctors, nurses and health workers that they will come if they get incentive, the Prime Minister said that if they want to get incentive they have to work first.

“Work now, deploy yourselves in this hard time. We’ll put you under watch for the next three months. If anyone really provides service to the people, then we’ll think about them,” she said.

The Prime Minister said there is no justification for deploying anyone who does not have sense of humanity.

“If that type of hard days comes to Bangladesh, we’ll bring doctors and nurses from abroad if necessary, but we can’t do anything with this type of weak mentality. This is reality,” she said.

Sheikh Hasina said doctors, nurses and health workers can hold meetings and come up with conditions but she would not bother with those.

She categorically said doctors have to provide treatment if any patient comes to them . “Yes, you can secure yourselves, but why the patients will return, why patients will die after going from door to door for treatment, why a student of Dhaka University will die?” she questioned.

She termed the incident as very much painful and regrettable . “That student didn’t get any treatment from any physician, he went from door to door, why doctors will not treat him?” she asked.

The Prime Minister said she instructed the authority to collect the names of the doctors who were on duty when the DU student went for treatment.

“They don’t have capability to provide treatment, [and] I think that they should be kicked out from their jobs,” she said.

She also said she knows it very well that COVID-19 is the name of an anxiety around the world.

“All have to remain safe. A doctor has his/her responsibilities and we’ve taken appropriate steps for them. We’re providing all materials they need and if necessary, we will give more. We’re making safety materials at home and importing from abroad,” she said.

But the Prime Minister highly appreciated doctors, nurses and health workers of the government hospitals for their outstanding service towards the patients.

“I’m conveying my sincere gratitude to them, they came forward, they did not show negligence, they worked hard knowing their risks, they provided services to COVID-19 infected patients risking their lives,” she said.

She also mentioned that the government announced war against COVID-19 and these doctors, nurses and health workers of the government hospitals discharged their duties staying in the frontline.

She thanked the field level government officials, employees, law enforcement agencies, army personnel and others for their efforts.

“As a result, so far we are able to keep this under control. This has not spread widely and the health situation is under total control due to everyone’s efforts,” she said.

Sheikh Hasina termed the month April as critical for the COVID-19 and urged all to work unitedly in a coordinated way.

“As per several predictions, the month will be critical for us. We have to remain alert so that we could suffer less due to COVID-19,” she said.

She again asked the concerned officials to prepare a separate list for the section of people who usually do not go for taking any type of government relief or help from the government’s safety net programmes.

She asked to provide their food items quietly so that their social dignity is not hurt.

The Prime Minister said she would not tolerate any irregularities and misappropriation in distributing relief materials.

She asked the concerned officials to take special effort for maintaining smooth supply of food.