Officials examine tea leaves to check quality prior to an auction at Agrabad in Chittagong.

Bangladesh, a country steeped in the tradition of tea plantation, is on the verge of losing its status as a tea-exporting nation.
“The tea industry once enjoyed the status of being a foreign currency earner for the country. Now, it’s a sorry sight to see,” said Shantanu Biswas, chief operating officer of Ispahani Tea.
In 2012, the production of tea exceeded demand by around 1,000 tonnes, with export earnings standing at a paltry Tk 22.23 crore, according to Bangladesh Tea Board.
“We used to export to Pakistan, Russia, the Middle East and a few other countries. Because of a dearth in exportable surplus, we now export in a value-added form, and that too in very small quantities, to the Middle East countries.”
The price of Bangladeshi tea shot up to $3.84 per kg in the last auction, which, the Ispahani official said is the reason why many countries have turned to Malaysia and Vietnam to meet their demands.
In the 15 years to 2009, the growth in tea production in Vietnam was 283 percent, whereas the figure for Bangladesh was a mere 26 percent, according to Biswas, a former president of Bangladesh Tea Traders Association.
“In the short term, the deficit in supply could be met by importing tea at reasonable prices. But the priority should be in increasing the production.”
Nader Khan, a director of Finlay Tea, said the 2.5 percent annual increase in production stipulated by the government is sufficient to avoid dependence on imports.
“But for a significant improvement of the situation, drastic steps will have to be taken,” he said, while calling for further assistance from the government.
“For instance, the government can extend soft loans to all tea companies,” said Khan, who is also the managing director of Halda Valley Tea Company in Chittagong,  On the allegation that some tea estate owners grow agricultural products that provide greater financial returns on the land, Khan stressed the need for an effective monitoring cell. He also called for punitive measures against such owners.
Meanwhile, the Bangladesh Tea Board has taken up 10 projects, each for 12 years, to increase annual production to 100 million kg by 2021.
Under these projects, 6,440 hectares of fallow land in six districts — Moulvibazar, Habiganj, Sylhet, Chittagong, Rangamati and Panchagarh — would be brought under tea plantation, to create an additional 106 gardens. 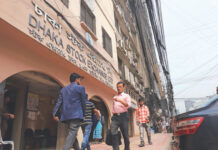