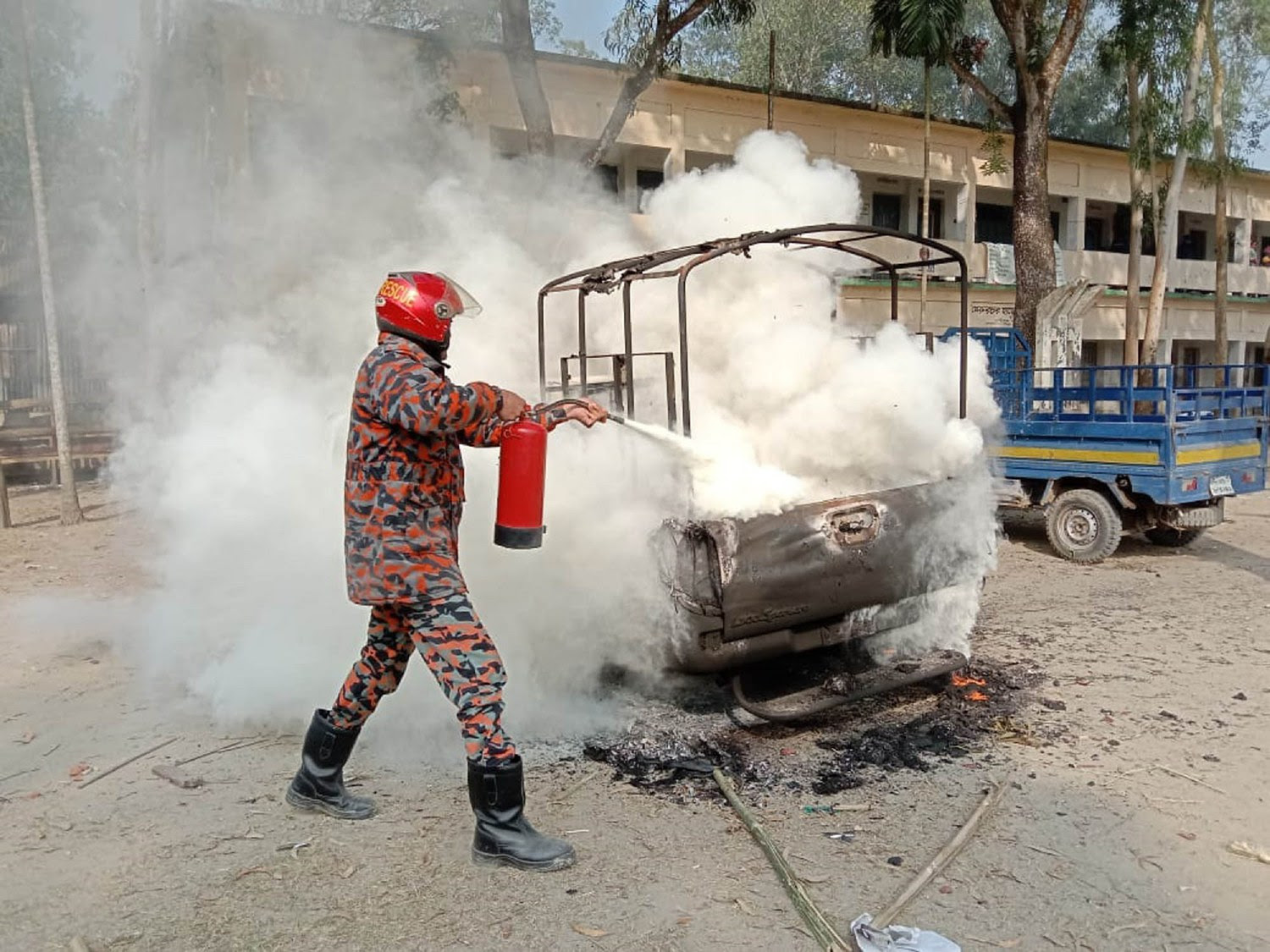 The death toll from violence around Union Council elections in Bangladesh surpassed 100 on Wednesday, as at least 10 people were killed in the latest stage of polling, including some by police gunfire, local authorities and an NGO said.

The opposition Bangladesh Nationalist Party (BNP) and other main parties are not participating in the polls, which have been unfolded in stages since June but been marred by violence, including infighting among the country’s ruling Awami League and between supporters of that party and independents.

Of those killed on Wednesday, five were in the northern Bogura district alone, with four of them dying in firing by the Border Guard Bangladesh (BGB), Zia Latiful Islam, officer-in-charge of the police station where the incident occurred, told BenarNews.

“BGB opened fire after some people engaged in a clash at the Kalaihata Government Primary School polling station,” he said.

Separately on Wednesday, two people were killed in poll-related violence in Chandpur district, and one each in Chattogram, Manikganj, and Gaibandha districts, according to information gathered from the Election Commission, the police and local hospitals.

Clashes were also reported in the Savar sub-district of Dhaka, Brahmanbaria, Cumilla, Noakhali, Munshiganj, and Jashore.

Violence in these rural administrative elections that are held every five years has risen sharply since 2016 when parties began to contest these polls, unlike earlier on when they were non-partisan, according to electoral violence data compiled by Sushasoner Jonno Nagorik, a local NGO.

Its figures show that 23 people were killed during the 2003 union council polls; 10 during the 2011 elections; and 143 in the last rural council election. Wednesday’s round of voting was the fifth of a seven-stage election, which is scheduled to end next month.

“In the so-called ‘vote battle,’ there are only battles now, no voting,” he told a press conference on Wednesday.

Talukdar also pointed to some irregularities he had witnessed at polling centers he visited.

“The vote is being cast openly in front of presiding officers. Witnesses and journalists have observed this but no measure has been taken. Police and RAB [Rapid Action Battalion officers] are on the spot but did not take any action. What election are we holding?” he said after visiting several polling centers in Ashulia, a Dhaka suburb.

When questioned about what measures the commission was taking to stem the violence, all Talukdar said was that the retuning officers were responsible for the conduct of elections.

The opposition BNP said it was not contesting these elections because, in its view, the Election Commission had lost its credibility to hold a fair election.

“Such huge violence in the ongoing local body polls justifies BNP’s decision not to join in the polls under the Election Commission as well as the government,” BNP official Ruhul Kabir Rizvi told BenarNews.

The ruling Awami League people want to “capture power at any positions” to the point where they are now fighting against their own party people, he said. Rizvi added that the violence could have been more widespread if the BNP and other opposition had been contesting.

Humayun Kabir Khandaker, secretary for the Election Commission, refuted all allegations against the commission at a press conference in Dhaka, saying the elections were largely peaceful bar some isolated incidents.

“The Election Commission is not responsible for such deaths or electoral violence,” he said when asked about the killings.

“I am requesting all candidates and supporters not to be emotional and show respect for each other.”

When asked about the violence, A.F.M Bahauddin Nasim, the Awami League’s joint general secretary, replied: “Violence in local government body elections in Bangladesh is not a new thing.”

“We are not expecting a loss of any life so we are requesting all concerned to act more carefully to prevent violence in the polls,” he told BenarNews.

Badiul Alam Majumder, an expert on elections and governance, sees no hope in the future for free, fair and non-violent elections in the country.

“The total electoral system has been ruined in Bangladesh, while massive violence and irregularities in the ongoing local body polls have become the last nail in the coffin of the electoral system,” he told BenarNews.

“Not only the next general election, all kinds of polls will suffer in the future as democratic institutions, including the Election Commission, have become loyal to the ruling party.”

Prime Minister Sheikh Hasina of the Awami League has been in power uninterrupted since 2009 and has won four general elections.