Out of their league 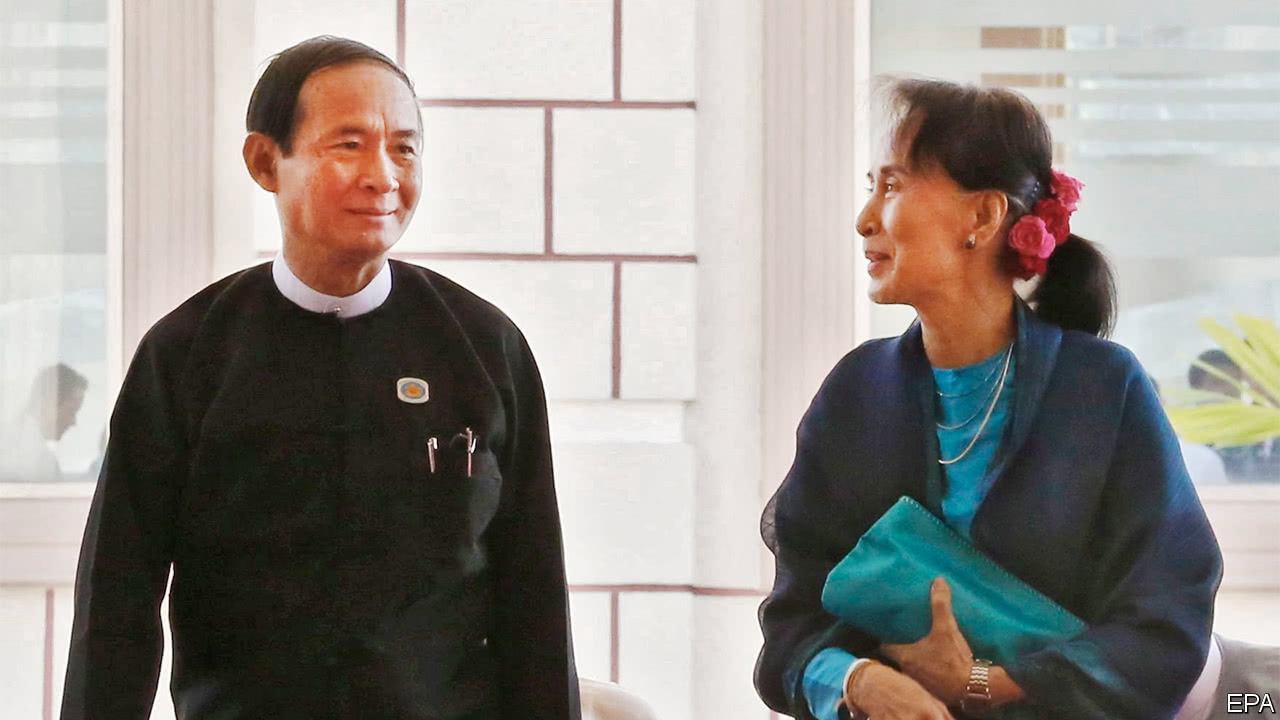 After two years of civilian rule, Myanmar’s politicians are gloomy

The National League for Democracy is struggling to make its mark

TIN TIN WIN never imagined she would become a politician. In Taungoo, a midsized city in the Burmese plains, she is mostly known as a family doctor. But three years ago she was asked to run for parliament by the National League for Democracy (NLD), the political party led by Aung San Suu Kyi, the activist whose long campaign for democracy was instrumental in ending military rule in Myanmar. She enthusiastically answered the call, and won.

Today her mood has dampened. She sits through long, boring parliamentary sessions in Naypyidaw, Myanmar’s purpose-built capital. Sometimes she wonders what the point of it all is. She once sponsored a motion to introduce sex education in schools (she has seen too many desperate pregnant teenagers at her clinic). But her own party took it off the agenda without much explanation. Only halfway through her term, she has already decided that she will not run again in 2020.

March 30th marked two years since the army ceded power to the NLD. But it left in place a constitution that exempts it from civilian control, puts it in charge of internal security and grants it a quarter of seats in parliament, massively curtailing the new government’s authority. The constitution also deliberately bars Ms Suu Kyi from the presidency, as the parent of foreigners (her children are British citizens). Ms Suu Kyi has at least got around that: she is, in her own words, “above the president”. In late March the placeman she had installed in the presidency announced on Facebook that he was resigning to “take a rest”. Parliament promptly elected a new one, Win Myint, an NLD loyalist like his predecessor. Little will change as a result. Ms Suu Kyi remains firmly in charge

Some things have improved markedly since the NLD took office. Myanmar has jumped up Transparency International’s corruption index, a survey based on public perceptions. Citizens are also much freer to speak their minds than they used to be. But NLD politicians are novices who struggle to put ideas into practice. Some were first elected in 1990, but were never allowed to take their seats in parliament. Instead, the army put many of them in jail. While Ms Suu Kyi runs the country, a clique of these ageing former political prisoners runs the party. They are not running much. The NLD is more a fan club than a party articulating policies and training future leaders. As a party whip puts it, “NLD minus Aung San Suu Kyi equals nearly zero.”

The new generation of MPs, elected in 2015, come from all walks of life: they are dentists, vets, journalists, teachers and entrepreneurs. They tend to be younger than their predecessors, and even though they admire Ms Suu Kyi, they are not as deferential as the old guard. They are energetic but disillusioned. “We want to catch elephants, but we can’t even catch ants,” sighs a freshly minted lawmaker. Like his colleague, Tin Tin Win, he will not run again. Anyone could do his job, he says.

The NLD is also cutting itself off from people with ideas. Foreign advisers are regarded with growing suspicion because of their complaints about Myanmar’s persecution of the Rohingya Muslim minority. Parliament is cooking up legislation to curb the activities of the UN and international NGOs. The NLD is even more hostile towards home-grown activists. The government has passed a law making it easier for police to ban protests. Mael Raynaud, a long-term observer of Burmese politics, notes that the NLD’s imprisoned leaders did not witness the blossoming of civil society in the 2000s thanks to a loosening up by the army and in response to a devastating cyclone. Years of repression also fostered paranoia, which has left the NLD prizing loyalty over competence.

The previous government, led by reformist generals, was hungry for legitimacy and hoped to redeem itself by instigating rapid change. The NLD has a mammoth popular mandate but doesn’t have a clear idea of what to do with it. Things were easier before, says Sandar Min, a long-term NLD member. “When we were fighting the military we had a clearly defined enemy. Now it’s not clear.”

Death toll from Myanmar religions riots rises to 40, amid fear of spreading unrest

Visitors from 43 countries can get Indian visa online