New Chief Election Commissioner KM Nurul Huda’s speech is like that of an ‘Awami League spokesperson’, a BNP leader has said. “The new CEC has said the polls to the national parliament should be held with an elected government in power. It’s natural that the new CEC, who was an organiser of the Janatar Mancha, has spoken and will speak like an Awami League spokesperson,” Rizvi said.

Addressing a press conference at the BNP headquarters on Thursday, Rizvi wondered if fair polls were possible under a CEC as Huda. “Even the people have doubts,” he said.

About Rakibuddin, the BNP leader said, “The former CEC has proved through his work that he is a very loyal and competent Awami CEC, not the chief of the constitutional body. He said those who took part in the Jan 5, 2014 elections believe in democracy.”

New CEC Huda has already reacted to the BNP’s criticism of him, saying it was ‘only a political strategy’ of the party.

He has also denied involvement with the Janatar Mancha, a platform formed to compel the then BNP ‘government’ to quit office after the controversial election of February 1996. 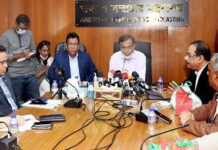