Afghanistan`s Mujeeb Ur Rahman (2nd L) celebrates with his teammates after the dismissal of Bangladesh`s Soumya Sarkar during the third match between Afghanistan and Bangladesh in the T20 Tri-nations cricket series at the Sher-e-Bangla National Stadium in Dhaka on September 15, 2019. AFP

Mujeeb Ur Rahman bagged four wickets following a 84-run tornado from Mohammad Nabi to lead Afghanistan to a comfortable 25-run victory over Bangladesh in their tri-nation series game on Sunday.The triumph sent the winners to the top of the table with four points as they recorded their second victory in as many games while Bangladesh sit second with two points, courtesy of their win over Zimbabwe.

The day did not start brightly for the Afghans though, who were four wickets down on 40 before Nabi and Asghar Afghan made 79 in the fifth wicket partnership to turn things around.

Although Afghan departed after making 40 in 37 balls, thanks to three fours and two sixes, Nabi kept hitting the ball all around the park.

His unbeaten 84 came in just 54 balls, a knock studded with three fours and seven sixes.

Choosing to bat first, the Afghans were dealt a blow in the very first ball, as Mohammad Saifuddin bowled Rahmanullah Gurbaz. Shakib Al Hasan struck in the next over to remove Hazratullah Zazai while Saifuddin got rid of Najeeb Tarakai in the following over.

Shakib now picked up Najibullah Zardan and the Afghans found themselves on 40 for 4.

Nabi and Afghan then steered the ship to calmer waters, their partnership taking the score to 164 for 6.

Saifuddin was the most successful bowler for the hosts, his four-wicket haul on the day is his career-best T20 performance as a bowler.

Chasing 165, Bangladesh lost their first wicket in the innings’ second ball when Najeeb Tarakai took a catch to dismiss Liton Das, as Mujeeb claimed his first wicket of the day.

Mushfiqur Rahim (5), Shakib (15) and Soumya Sarkar (0) failed to do the job required, all but ending any hopes for a successful chase. Mahmudullah hit 44 off 39 and Sabbir Rahman made 24, but that only slashed the margin of the loss.

Mustafizur Rahman entertained the crowd with 15 off 7 balls late on, before Fareed Ahmed brought an end to his exploits, and Bangladesh were bundled out for 139.

Fareed, captain Rashid Khan and Gulbadin Naib claimed two wickets each while Nabi was named the Man-of-the-Match for his match-winning knock.

Bangladesh will play their next game on the 18th, against Zimbabwe at Chattogram.

Despite today’s loss, a win in that game will put the Tigers in 24 August’s final. And one match away from the title. 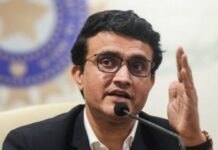 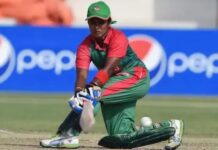