Finance minister Abul Maal Abdul Muhith has tagged the tax exemption on import of liquefied natural gas and its local supply with the downward rationalisation of gas prices in the domestic market.
Once the local supply of LNG through the national pipeline begins, gas prices would rise.
Bangladesh Energy Regulatory Commission recently held a public hearing on the gas price hike keeping an eye on the LNG supply.
Officials of the finance ministry said that Muhith on May 20 had instructed the National Board of Revenue to seek recommendation from the power, energy and mineral resources ministry in this connection.
They said that the NBR had already requested the ministry to give its opinion on the issue.
Muhith also made some observations on a summery on exemption of various types of taxes and duties on import of LNG and supply of that gas after blending with gas extracted from domestic fields to the local market.
Currently, there are 31.07 per cent duties including 5 per cent customs duty, 15 per cent value-added tax and 5 per cent advance income tax, on import of LNG while consumers pay 122.22 per cent taxes and charges including 93.24 per cent supplementary duty and 15 per cent VAT on supplied gas.
The NBR, as per instruction of the government high-ups, decided in principle to waive all types of duties and taxes, except 15 per cent VAT, on both import of LNG and its local supply.
‘Exemption should be given but power and energy ministry will also have to rationalise the domestic prices of gas,’ Muhith commented on the NBR summery.
It is essential to rationalise the prices of gas though the rate of subsidy would go up for the sector, he said.
‘I am waiting for recommendation of the ministry on the issue,’ he said.
NBR officials on Wednesday told New Age that they had already requested the power and energy ministry to inform the revenue board what should be the gas prices in line with the instruction of the finance minister.
The ministry is yet to reply to the NBR letter on the issue, they said.
‘It seems that the finance minister wants to see the impact of tax exemption on LNG and gas supply on consumers,’ said a senior NBR official.
He also said that the NBR also wanted to keep the impact of withdrawal of the taxes minimum on the overall revenue collection as the tax authority every year earned taxes worth several thousands of crores of taka from the sector.
Officials of the power and energy ministry, however, said that the prices of gas would go up once LNG supply started.
Muhith himself and state minister for power, energy and mineral resources Nasrul Hamid on several occasions hinted at a possible gas price hike once LNG supply started.
The first shipment of LNG which arrived in late April in the country is still waiting to join the domestic gas supply through the national pipeline. 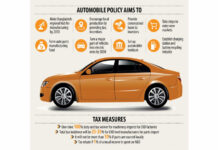