Bangladesh Nationalist Party vice chairman and former minister Major (retd) Hafiz Uddin Ahmed thinks if people can prove their strength on streets amidst the existing economic situation, it is possible to realise the demand for a non-partisan government. People are getting inclined towards BNP and that is because of the Awami League’s failure than that of the BNP’s success. Hafiz Uddin Ahmed talked to Prothom Alo from the perspective of the recent firing of police that left two leaders of the party dead.

How do you view the Bhola incident?

This is a showdown of incumbent government’s muscle power. Since they are not elected by people, police and other forces are the pillar of their power. Getting the unlimited power, police have become aggressive and opened fire on a peaceful political event without provocation. The present government want to stay in power by force.

It seems from the remarks of the ruling party leaders and minister that they are prepared for election. What is the preparation of BNP?

BNP is always ready for election. It has a huge vote bank. Those who are not members of any party and cast vote consciously are also getting inclined towards BNP. And this is because of the failure of Awami League more than that of the achievement of BNP. People are getting inclined towards BNP because of being enraged over their misrule. At least three candidates of BNP are ready in any constituency to contest the election, if it is conducted anytime. People become eager to vote.

BNP announced it would not take part in election under this government. What is the preparation of BNP then? Participating in election or resisting it?

I think BNP is trying hard for resistance in bid to to install a neutral government. Those two boys who were shot dead were in fact waging the movement for establishing a non-partisan government. There is nothing called last thing in politics. Amid the existing economic situation, it is possible for the government to meet the demand for a neutral government. Everything will be possible if people can prove an active presence and show power on the street.

You are talking about people spontaneously taking to streets, but BNP has not gone for any big programme yet even after the rise in fuel oil price.

BNP wants to take practical programmes. It is difficult to oust incumbent government by taking to the streets. So, BNP is moving ahead slowly. Perhaps, BNP is waiting instead of wasting energy, so that they can deploy full forces when election nears.

What is your personal preparation on election?

I have no personal preparation. I have been elected from Lalmohon-Tamijuddin constituency for six times. Almost everyone is familiar. I can proudly say I did a lot of development in these two upazilas. I think I have satisfied the people so they elected me as an independent candidate. I am one of three neutral lawmakers who were elected in 1991 and that is the most pride in my political life. I have a confidence on people of my area.

You are a central leader, a vice chairman of the party but you seem to be casual over BNP’s policymaking decisions. Besides, you are not often seen in party rallies and programmes in Dhaka. Why is it?

I am not hesitated to say that I don’t have any influence in BNP. I was in the committee of 15 vice chairmen formed during Khaleda Zia. It is now a committee of 33 and I may be somewhere at eighth to tenth position. I became a vice chairman 24 years ago. Since then, those who were posted in the standing committee and other positions are my juniors. There are many reasons, may be I was….

You are not called or you yourself do not go?

I can mention one event such as Independence Day event. I was an army officer of Z force under Ziaur Rahman. We occupied Sylhet after a ferocious battle. I fought various battles under the leadership of Ziaur Rahman. There is no one like me in BNP but I am not invited to the Independence Day event and that hurts me. When Khaleda Begum was there I was called. Now no one calls me. Even then I go to the party programme when I can.

Why is there a distance?

It is not exactly a distance and again a distance too. What will I say? There are several opportunists who have given an assumption to the party of leadership that Hafiz Uddin Ahmed is a reformist. Had I been a reformist, Khaleda Zia would have not kept me in the party. Ask Khaleda Zia, you will know what I am. I followed orders that she had given from jail. Now they are bigger leaders of BNP than Saifur Rahman and Khaleda Zia and BNP has such many things now. It is not possible to say everything openly. I cannot flatter anyone and that is my failure.

Have you ever informed the party top leadership about the matter?

I didn’t ever. Complaining is not in my nature. I have become old. I will be 78 in September. There is no one senior to me in BNP except former speaker Muhammad Jamiruddin Sircar and Selima Rahman. Others are junior to me. All leaders except Khandaker Mosharraf Hossain held position lower than me. They elevated to higher position at their own ability, maybe I don’t have such ability.

Once I was a best footballer of the country. Everyone in army knows what kind of officer I was. I did not become a lawmaker at anyone’s mercy. I joined BNP after becoming the lawmaker. All things considered, there is some pride in me. I am not someone who will bend to anyone. I love the party and I have been in it for 31 years, albeit it is becoming difficult to get involved in the party.

Is it because you are a reformist?

Not really, it can be for other reasons. It is difficult for me to say why the party top leadership does not like me. Maybe, someone does not want me in the party. I, too, had been served with showcase notice and I said everything in my response to it. I think BNP or grassroots leaders and activists are satisfied over my response. I do not know what the mindset of the top leaders. They never contacted me.

You were served the notice on allegations of violating party discipline but behind the scene was your activity outside the party to oust the government. Many also held meetings in Bangkok on this purpose and you allegedly had link to it.

I never had opportunities to attend such meetings. I do not see such strong person who will bring down the government, holding meetings outside. It is not possible to oust the government by an unknown group where a big party like BNP is struggling to do so. It is really a fiction.

As much as it is learned, that process has started anew. A meeting may be held in Bangkok this month and a politician from the leadership of a newly formed party and a former vice chancellor are also involved in it. Do you know anything about it?

I know nothing about it and I will not be there too. I also do not believe in this.

If anyone dreams for fall of the government and carry out activities to this end, do you thinks that will be successful?

Not at all, because present government has taken full control of all armed forces including police. There is no person in Bangladesh who will break this control. Only BNP can, if it can create situation like Sri Lanka on the streets. Anyone will bring down the government, holding meeting outside that is completely a ridiculous effort.

Other than BNP, religion-based parties and organisations can drive the government into a corner but the government also managed. So, anyone holding meeting in Bangkok will bring down the government amidst this situation is out of question.

Who are behind such effort?

It may be a trick to earn money. Many people earn extra money from the politics of Bangladesh by spreading rumours and carrying out various activities. There are some people who buy nominations during parliamentary election and those include some middlemen who earn money on promise of helping people get nomination from big parties.

You were saying that only the BNP can oust the current regime. Does the BNP have the necessary organisational capacity?

BNP has the organisational capacity. But those who could use this organisational power to heat up the field have been pushed away. They now cannot exercise their power. Circumstances will make them stronger—those who now feel weak and shaky to take to the streets. This government can do everything, but it cannot prevent an economic disaster—if the IMF does not give money.

If the commodity prices go out of control further due to global issues, there is no need for BNP to motivate anyone. The masses will go to the field in their own will, out of their frustration. When people starve, there will be chaos in the society. Then it will not be necessary for them to see what BNP has said. People will take positions in the field directly against the government. The strong role of people in the streets can lead to the collapse of the government. Then the BNP will be its beneficiary.

‘National government’ is a hot topic in politics now. Do you see any possibility of something like this?

No, I do not see anything like that. But BNP has invited some small parties to remain united with. They know that there are no people behind them, but the leaders and their speeches are good. BNP has no speaker like them. They will warm up the ground with speeches and the BNP will benefit from it. Realizing this fact, they want to secure their place in the national government early on. I do not know what kind of assurance BNP has provided them.

If the government is overthrown by an uprising, then there will be an authority. They will surely try to control the country by forming an all-party government or something else. An all-party government can be formed to mitigate the public sufferings, make the economy stronger, and uphold the law and order situation. All these may happen if Awami League falls.

In a different context, if Sheikh Hasina meets the demand and forms an all-party government, seeing the situation in Sri Lanka and assuming her own danger. If a government is formed with the parties that have representation in the parliament, Bangladesh can be saved from a disaster. The current prime minister can take a statesmanlike step, though it is unlikely to happen. It can only happen after a mass uprising. 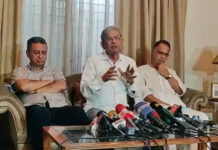 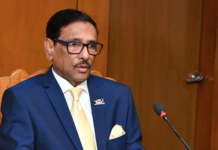 Hartal ends at 4pm as Jamaat cuts it short