The authorities have decided to deploy paramilitary Border Guard Bangladesh (BGB) in five districts of Chittagong division from today to ensure security during Durga Puja – the largest religious festival of the Hindus in the country.

Lt Col Nasir Uddin Ekram, BGB east-south zone headquarter’s director (operation), confirmed this while talking to The Daily Star, adding that the measure was taken to ensure foolproof security during the Puja.

“BGB will be deployed from today evening and will remain vigilant until the end of Durga Puja to ward off any violence,” he said.

“We are not facing any security threats from any quarters. However, the intelligence community are alert at all strategic points,” the BGB official said.

“We will take immediate action if any possible threat comes from any quarter,” he added without specifying how many platoons of BGB will be deployed in and around the division. 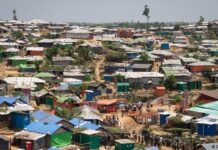