The second undersea cable in Bangladesh has started commercial operations from Sunday, after almost an one-year delay.

Prime Minister Sheikh Hasina inaugurated the cable through a video conference from her official residence Gono Bhaban in Dhaka in the morning.

The cable was built at a cost of Tk 660 crore will have an initial bandwidth of 200 Gigabits per second (Gbps), which will be raised to 1,500 Gbps in phases, said managing director of state-run Bangladesh Submarine Cable Company (BSCCL), Monwar Hossain.

Bangladesh was connected with the second submarine cable (South East Asia-Middle East-Western Europe 5) at the landing station in Kuakata back in February 21.

However, the BSCCL could not initiate commercial operations as there was no inland link from Kuakata to Dhaka.

The Bangladesh Telecommunications Company Ltd was given the job to set up inland connections from the coastline to capital Dhaka, but the state-run company had failed to set it up in time.

The undersea cable is owned by 19 companies from 16 countries including Bangladesh. The cable was inaugurated at a ceremony in Honolulu, Hawaii in January this year, and all the countries except Bangladesh have been using it for commercial purposes since then.

On March 2, State Minister for Telecom Tarana Halim told reporters during a visit to the landing station that the commercial operations of the cable would begin in the first half of the same month.
Later July 31 was fixed as the launch date.

However, the date had to be shifted again as the inland link was down for 12 hours just before the opening ceremony.

With the latest addition to the country’s internet lines, the government can step down from importing broadband from India.

Currently, Bangladesh uses 180 Gbps bandwidth from its first submarine cable (SEA-ME-WE-4), which was set up in 2006. Another 260 Gbps is imported from India.

Initially, the longevity of the new cable was fixed at 20 years, which may be increased to 25 years through optimum maintenance. The BSCCL has borrowed $44 million from the Islamic Development Bank for the project, the repayment of which will begin soon. 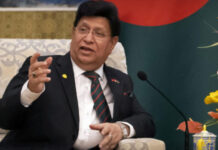 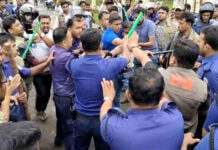