Reshma Begum, who spent 17 days under rubble of building, will earn seven times what she was paid as garment worker 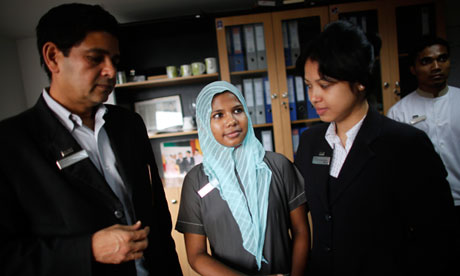 Reshma Begum, centre, at the Westin five-star hotel in Dhaka where she will now work.

A sewing-machine operator who survived for more than two weeks buried in the rubble of a collapsed garment factory in Bangladesh has left hospital to take up a new job at an international luxury hotel chain.

Millions of people across the poor south Asian country watched live on television as Reshma Begum, 20, was pulled from the ruins of the Rana Plaza factory complex, where workers had stitched cheap clothes for western retailers, 17 days after the eight-storey building collapsed.

More than 1,100 people, mainly young women, were killed in the disaster which prompted widespread criticism of the major international brands that source goods in Bangladesh.

“I am OK now, doing fine. I am grateful to everybody,” Begum said as she left the hospital earlier in the day.

Her new job as a “public area ambassador” in the five-star Westin hotel in Dhaka was arranged by the government.

The youngest of five children, Begum earned 4,700 takas (£40) a month working 14 hours a day, seven days a week at Rana Plaza in the town of Savar, an hour's drive outside the capital of Dhaka. The workshop's clients included the UK high street stores Primark and Matalan. 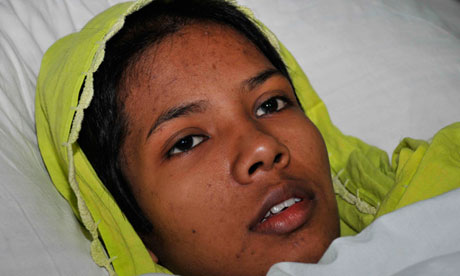 Reshma Begum after she was rescued from the wreckage of the eight-storey Rana Plaza building. Photograph: AFP/Getty Images

Bangladesh exported £13bn of garments last year, with more than 80% going to the west.

“I still feel very troubled at night,” Begum told reporters. “Whenever I think of those days, I feel scared. I cannot remember much of what I did when I was under the rubble.”

Activists say no provision has been made for counselling victims of the disaster.

Begum is from a remote rural village and her father died when she was 13, forcing her to skip school and work as a cleaner to earn an income for the family, said Zabibul Islam, her elder brother. She got the job at Rana Plaza three years ago.

“When we heard about the collapse, we travelled overnight from our village to the site. We never thought we would see her alive. I had made up my mind that I would find her body and bring it home,” said Islam.

His sister suffered minor head injuries in the collapse but was otherwise unharmed and was able to survive in a cavity on biscuits she and other workers had brought for lunch on the day of the disaster. She beat a metal pipe with a rod to attract rescuers' attention.

Rescuers said she was standing up when they found her.

Begum is an exception, however. Many hundreds of workers and relatives are still waiting for rehabilitation as well as compensation for their lost employment. On Wednesday former workers at Rana Plaza took to the streets to demand compensation and back pay. Police opened fire and used teargas to disperse the protest.

The Rana Plaza tragedy has created global pressure for reform in the booming Bangladeshi garment industry. Two separate agreements have been negotiated among European and US retailers to work for improvements in working conditions. Legal minimum pay is set to be raised too.

The government has blamed the owners and builders of the complex for using shoddy construction materials, including substandard rods, bricks and cement, and not obtaining the necessary clearances. Sohel Rana, the owner, has been detained.

A police report seen by the Guardian says the building was constructed on swampy land. Six storeys were built in 2006, with a further two added later. Vibrations from generators used to supply electricity during frequent power cuts triggered the collapse.

The building had developed cracks the day before but worried workers were forced to return to work on the day of the collapse by managers who threatened to dock their pay. Most earned between £30 and £60 a month.

There has been a series of deadly accidents in Bangladesh's garment industry, which employs about 4 million people. A fire at a factory in November killed 114 people. Another killed eight people in Dhaka in early May.