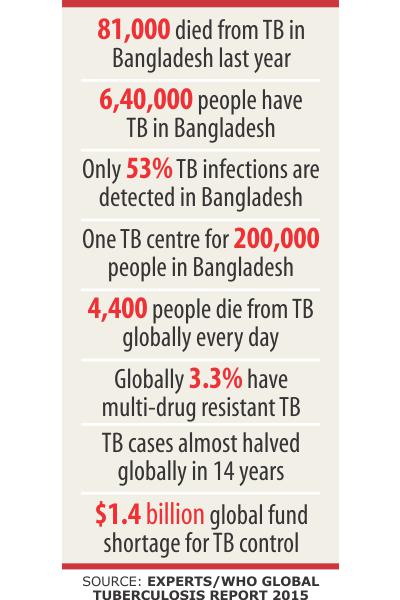 A total of 1.5 million people died from TB in 2014, says the WHO Global Tuberculosis Report 2015 released yesterday.

It was a significant progress compared to that of 2000 when the figure was almost double, said the report released in Washington.

The disease ranks alongside HIV as a leading killer worldwide.

The TB situation, however, has not improved in Bangladesh where 81,000 died from TB last year, the figure was 80,000 the previous year.

TB patients with HIV/AIDS in the country are very low, just 1,110.

“The report shows that TB control has had a tremendous impact in terms of lives saved and patients cured,” said WHO Director-General Margaret Chan in a statement.

“These advances are heartening, but if the world is to end this epidemic, it needs to scale up services and, critically, invest in research.”

Worldwide, TB infections have dropped 18 percent since 2000, which is 1.5 percent every year.

However, these figures reflect increased and improved national data and in-depth studies rather than any increase in the spread of the disease.

More than half of the world’s TB cases (54 percent) were in China, India, Indonesia, Nigeria and Pakistan. Among new cases, an estimated 3.3 percent have multidrug-resistant TB, a level that has remained unchanged in recent years.

The WHO highlighted the need for close detection and treatment gaps, fill funding shortfalls, and develop new diagnostics, drugs and vaccines.

The report says Bangladesh’s National TB Programme budget is $48 million. Of it, less than 1 percent was domestically funded, 70 percent internationally funded and nearly 30 percent was unfunded.

A TB control expert in Bangladesh said only 53 percent of TB infected people were estimated to be diagnosed while the others go undetected.

“A primary reason for detection and treatment gap is a major shortfall in funding,” said Winnie Mpanju-Shumbusho, WHO assistant director-general for HIV, TB, malaria and neglected tropical diseases.

This shortfall amounted to $1.4 billion this year.

In addition, an annual funding gap of at least $1.3 billion must be filled for research that would include the development of new diagnostics, drugs and vaccines, Winnie said.

Mrinal Sen versus Satyajit Ray: The war of words that lasted nearly 30 years