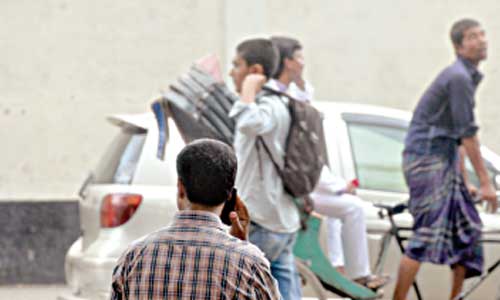 The telecom ministry on Thursday changed its stance on re-registration of subscriber identity module (SIM) cards and decided that the operators would launch screening to find out fake and faulty users for registration.
Earlier, the ministry decided that all the SIMs must be re-registered.
A meeting between state minister for telecommunication Tarana Halim and the chief executive officers of all mobile phone companies decided that phone companies have to verify the subscribers’ registration first with the Election Commission database of national identity cards.
‘After that the SIMs which will be found unregistered or fake, users of those will be contacted through SMS. If the faulty users don’t register after that, then we will terminate the SIMs,’ Tarana told reporters after the meeting.
She said that mobile operators would have to handover all data of mobile users to the NID authorities for verification.
Tarana earlier had said that all users must re-register their SIM cards by December starting from Sunday.
A senior official of a mobile phone company said the task would be very troublesome for the mobile operators.
‘We usually keep the customers’ information in scanned picture format. So we have to basically create a new database so that the EC can check those,’ he said.
The latest bout of SIM re-registration move by the government created confusion as the telecom state minister and the Bangladesh Telecommunication Regulatory Commission came up with different version of order.
BTRC chairman Sunil Kanti Bose said that only the subscribers who need to update information would go for re-registration.
Tarana, on the other hand, ruled out Sunil’s explanation saying all mobile users have to do the registration again otherwise their connection will be terminated.
The government’s move came following increasing crime through mobile connection with fake registration.
On October 11, 2012, the Bangladesh Telecommunication Regulatory Commission had decided that the operators could not sell pre-activated SIM cards. It had also said if any customer used unregistered SIM card, the operator would have to pay a fine of $50, but the law is yet to be enforced.
According to statistics of the BTRC till July, six mobile phone operators in the country have total 12.87 crore subscribers.
Source: New Age