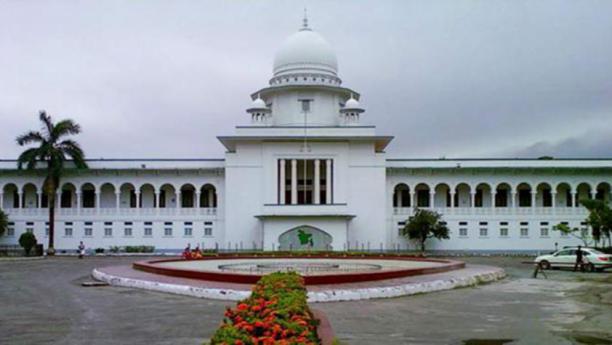 The High Court yesterday ordered the government to explain in two weeks why it should not be directed to form an enquiry commission to identify the “culprits who made up false stories” about a corruption conspiracy involving the Padma bridge project.

In a suomoto ruling, the court also asked the authorities to explain why they should not be ordered to bring those behind such stories to justice.

The World Bank, the main financier of the project, raised the allegation in 2011 and eventually withdrew from the project. Later, Canadian police sued some top officials of SNC-Lavalin, a Canadian construction firm.

The cabinet secretary, secretaries to the home and communications ministries, the Anti-Corruption Commission chairman and the Inspector General of Police are respondents to the HC rule.

The court ordered the cabinet secretary to submit a report to it within 30 days on the steps taken in line with the rule, Deputy Attorney General Tapas Kumar Biswas told The Daily Star.

Separately, the Customs Intelligence and Investigation Directorate (CIID) yesterday requested the WB to provide details of 16 duty-free vehicles imported by its officials. In a letter to the WB Dhaka office, the CIID said the information was vital for completing its investigation into “misuse of vehicles” by privileged persons (such as diplomats and foreign aid workers).

The CIID in its primary investigation found many foreigners, who had been working in different international organisations, left Bangladesh by selling their duty-free vehicles.

The letter said the 16 duty-free vehicles in question were imported by WB officials. But the passbooks related to these vehicles have not been surrendered and the vehicles have remained “undisposed of”.

Under the law, all officials must surrender the vehicles before leaving the country and failure to comply is a punishable offence.

And if any official fails to surrender the vehicles before leaving the country, the head of the organisation will be held responsible, said Moinul Khan, director general of CIID.

Originally, the CIID opened the investigation into such unsettled vehicles previously used by all privileged persons of foreign nationality in July last year.

Contacted, Qimiao Fan, World Bank Country Director for Bangladesh, Bhutan and Nepal said in an email, “The World Bank Dhaka office has returned 35 passbooks not submitted earlier when the respective expatriate staff left the Dhaka office, which also include nine passbooks from the names mentioned in the letter sent today [yesterday] to the World Bank from the Customs Intelligence and Investigation Directorate.

“We are checking and locating the status of the remaining outstanding passbooks. The World Bank has asked National Board of Revenue (NBR) for a six-month time period for renewal and surrender of the rest of the passbooks, and will work closely with the NBR to resolve any discrepancies.”

In another development, the ruling Awami League led-14 party alliance has demanded that the WB pay $1 billion in compensation for causing the delay in the Padma bridge construction by raising the graft allegation.

Health Minister Mohammed Nasim, also spokesperson for the alliance, told reporters yesterday that Bangladesh had been financially affected because of the “false allegation”.

Following a meeting of the alliance at at AL President Sheikh Hasina’s political office at Dhanmondi, Nasim also alleged that Nobel laureate Dr Muhammad Yunus was the mastermind.

He called on the House Speaker to summon Yunus and others “involved in the conspiracy” to stop the WB funding before a parliamentary body for questioning.

In moves seen as government efforts to have the loan revived, Abul Hossain resigned, bridges division secretary Mosharraf Hossain Bhuiyan was sent to jail and PM’s adviser Mashiur Rahman was sidelined, though he held his post.

Even so, the WB cancelled the credit in 2014, saying it had proof of corruption conspiracy involving Bangladesh officials, several executives of Canadian firm SNC-Lavalin and some individuals.

In Canada, the Royal Canadian Mounted Police (RCMP) pressed charges against five people, but charges against two people — Mohammad Ismail and Abul Hasan Chowdhury — were eventually dropped, according to the Globe and Mail newspaper.

Earlier in October 2014, a Dhaka court acquitted all seven Bangladesh government officials, including Mosharraf Hossain. The same year, the Anti-Corruption Commission cleared all the seven of the graft charges.

Following the WB’s loan cancellation, the PM vowed to build the bridge with government funds. The construction of the 6.2km bridge over the Padma river is now underway and is expected to be completed by next year.

At the moment, all traffic relies on ferries, which is time-consuming and sometimes risky.