A sudden decision by Titas Gas to stop supplying CNG refuelling stations for maintenance of a gas field has created transport chaos in many parts of Bangladesh including the capital Dhaka. 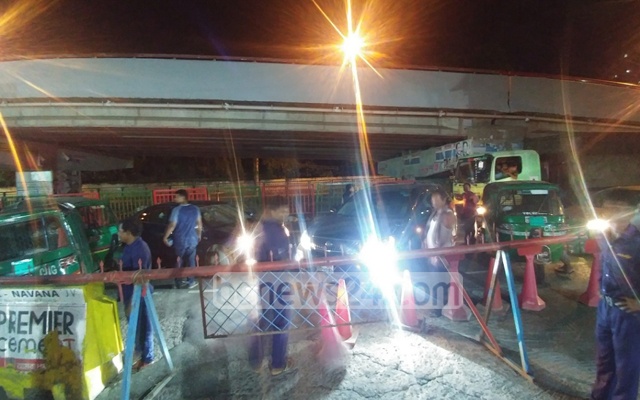 The decision to stop the supply from Tuesday midnight for 24 hours was revealed only a few hours beforehand.

The CNG stations in Dhaka closed at midnight, turning back vehicles that rushed to the stations when the news about the Titas decision got out.

Anudip CNG Conversion and Servicing Centre in Moghbazar stopped refueling vehicles at 12am on Wednesday.

Hasanul Islam, a worker at the station, said they will not service vehicles until Wednesday midnight following orders from the owners.

CNG-run auto-rickshaw driver Abdur Rahman expressed frustrations after failing to get gas even though they waited for around one and a half hours.

He told bdnews24.com that he rushed to the station on hearing the news around 11pm.

“They’ve stopped giving us gas without any prior notice. Now what will we do?” he asked.

Lavlu Mia, a driver, said he also dashed to the station to fill his car gas cylinder after his employer informed him about the closure. “But I didn’t get gas,” he said.

A long queue of vehicles developed at the refuelling station in Tejgaon Satraasta intersection.

An official at the station said the owner called around 10pm and asked them to stop refuelling vehicles at midnight.

Auto-rickshaw driver Tajuddin, waiting for gas there, said he came after being informed by the vehicle’s owner.

Md Ali Ashraf, another auto-rickshaw driver, said he woke up from sleep and came from Badda after getting the owner’s call.

Auto-rickshaw driver Shahidul Islam in Mohakhali said after midnight that he saw the CNG refuelling stations closed on his way from Panthapath.

He said they would stop supplying gas to filling stations throughout the country for 24 hours from Tuesday midnight due to maintenance work at Bibiyana field after 9pm.

The state-run gas transmission and distribution company has chosen the time for the overhaul because the demand has dropped as factories remain closed during Eid holidays, Waheduzzaman said.

He said state-owned energy company Petrobangla informed Titas Gas about the move in a letter. Titas supplies gas to 60 percent of the CNG refuelling stations in Bangladesh.

The Titas official also said household users would get gas on a ‘limited scale’ during this 24-hour period.

Tuesday was the last Eid-ul-Fitr holiday. Those returning to Dhaka from home after celebrating the Eid with their families may face problems due to the supply disruption Wednesday.

A similar switch-off occurred for the Bibiyana gas field maintenance on the Eid day in 2015.

Drivers had to wait in long queues at the filling stations on that night. The people also suffered the following day due to lack of CNG auto-rickshaws.

CNG Filling Station Owners’ Association General Secretary Farhan Noor thinks the people returning to Dhaka would suffer this time also due to the halt in supply.

“This decision contradicts the previous one on keeping the stations open around the clock for 10 days during the Eid for smooth journeys,” he told bdnews24.com.

He said many were already crowding the filling stations on learning about the disruption.

“It would have been better if the maintenance work was done after the Eid rush,” he added.

Prices of rice increase in capital