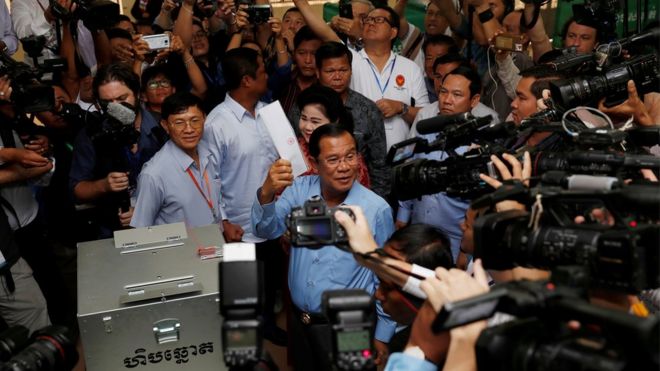 The party of Cambodian Prime Minister Hun Sen, who has been in power since 1985, says it has won a landslide victory in a general election that lacked any serious challengers.

The Cambodian People’s Party (CPP) said it had won all 125 seats in parliament with 77.5% of the vote.

Critics have called the vote a sham as the Cambodia National Rescue Party (CNRP), which narrowly lost the last election, has been dissolved.

The US said the poll was “flawed”.

“We are profoundly disappointed in the government’s choice to disenfranchise millions of voters, who are rightly proud of their country’s development over the past 25 years,” a statement from the White House said.

The US will consider placing visa restrictions on more government officials, it added. The EU has said it is considering economic sanctions.

Election staff said voter turnout was more than 82% but rights groups said rural voters and factory workers were pressured to vote. Reports suggested a significant number of ballots had been spoiled.

In a statement on his Facebook page, former CNRP leader Sam Rainsy, who is living in exile abroad, said “a victory without a contest is a hollow one”.

“The result of this false election conducted in a climate of fear is a betrayal of the popular will,” he said.

The CPP said 19 other parties had stood and a government spokesman criticised the US statement.

“This is against the Cambodians who went to vote to decide their own fate,” Phay Siphan told Reuters news agency.

Analysts had said the turnout figure would be a key test for Hun Sen’s legitimacy. During the campaign, opposition activists calling for a voter boycott had been accused of incitement.

On Friday, the government ordered internet service providers in the country to block a number of independent news websites, including Radio Free Asia, Voice of America and Voice of Democracy.

As part of a large UN peacekeeping mission, Cambodia held its first multi-party elections in decades in 1993 after years of bloodshed and war. Some two million people are estimated to have died between 1975 and 1979 when the country was ruled by the radical communists of the Khmer Rouge.

Hun Sen, a former soldier in the Khmer Rouge who later opposed them, has presided over a sustained period of rapid economic growth.

He has long been accused of using the courts and security forces to crush dissent and intimidate critics, but has for years allowed some measure of political opposition to his CPP party.

This election however marks the “death” of democracy in Cambodia, senior opposition figure Mu Sochua told the BBC. 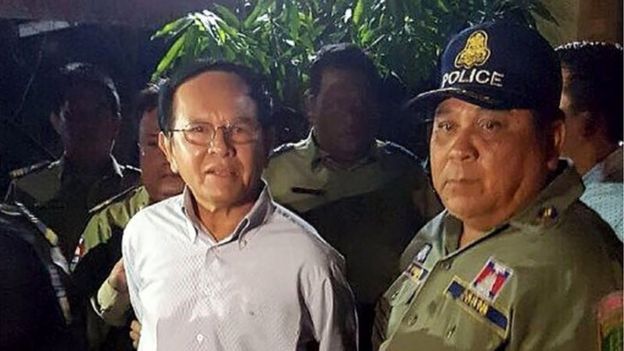 It was allowed to contest local elections last year, and won around 44% of the popular vote.

Since then, its leader has been jailed for alleged treason, and much of its senior leadership has fled abroad, trying to drum up support for international sanctions. Independent media outlets have closed or left the country and journalists have been arrested.

The party itself was dissolved in November by the Supreme Court, based on a complaint from the government that it was conspiring with the US to overthrow it. All its elected politicians lost their positions, including 55 seats in the then 123-seat National Assembly.

The US and the EU, which both lavished aid on Cambodia after its first UN-administered election in 1993, cut off electoral assistance for this poll.

But China, which recently gave more than $130m in military aid to Cambodia, sent observers for the first time.