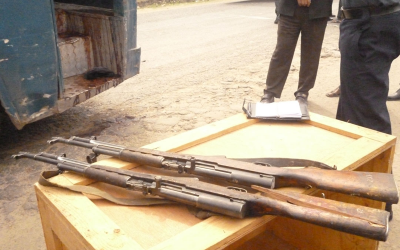 BNP standing committee member Rafiqul Islam Miah on Sunday voiced concern over the snatching of three convicted militants from a prison van in Mymensingh and demanded their recapture in 12 hours.

Addressing a discussion, the BNP leader claimed that the Mymensingh incident and the escaping of four accused in the Jubair Ahmed murder case from a courtroom on the same day are indication of the sharp deterioration in law and order situation.

Narrating the two incidents, Rafiqul said, “This is a grave threat to the rule of law and the country’s sovereignty.”

In a daring terror strike on a prison van on Sunday, militants snatched three convicted members of the banned militant outfit Jama’at-ul-Mujahideen Bangladesh (JMB) in Trishal upazila of Mymensingh killing a cop.

Police and Rapid Action Battalion (Rab) members recaptured one of the snatched convicts while two others are still at large.

In another incident, four accused in Jubair Ahmed, 23, an undergraduate student of English Department at Jahangirnagar University (JU), murder case escaped from the dock after a court here on Sunday cancelled their bail.

Condemning the incidents, Rafiqul said, “The government roars every moment, but these two incidents have exposed how much the law and order has declined.”

Turning to the Upazila polls, the BNP leader expressed fear that the government might indulge in massive vote rigging in the second phase of the upazila polls due to their debacle in the first phase.

“The government has got scared seeing the overwhelming success of the 19-party candidates in the first phase of the polls. We’re apprehending that the regime may stanch people’s verdict in the second phase,” he observed.

Rafiqul called upon the country’s people to remain alert to thwart any such move and the government’s all evil designs.