Abuzz with party activists and leaders after a long time, BNP’s Naya Paltan central office sold 1,336 nomination papers on the first day on Monday among those who want to contest the 11th parliamentary elections with its tickets.

BNP nomination hopefuls from across the country started gathering in front of the office since early morning along with their thousands of supporters to collect nomination papers.

Even before the formal start of the nomination paper sale, the BNP office and its surrounding areas wore a festive look as hundreds of leaders and supporters flocked to the areas following the party’s decision to join the national election after long 10 years.

Holding posters, banners and portraits of party chairperson Khaleda Zia, acting chairman Tarique Rahman and nomination aspirants, the party activists chanted slogans in favour of their respective nomination seekers in a bid to demonstrate their popularity.

They also raised slogans demanding the release of Khaleda Zia who has been in jail since 8 February last as she was convicted in a graft case.

The huge gathering of the BNP leaders and activists in the capital’s busy area triggered huge tailback, causing immense sufferings to commuters.

The sale of nomination forms began at 10:45am with the purchase of two nomination papers for its jailed chairperson Khaleda Zia and it continued until 8pm.

Though the nomination papers were bought for her, it is still not clear whether the BNP chief can contest the election as she was convicted in two corruption cases.

Mirza Fakhrul also bought a form for himself around 11:30am to contest the election from Thakurgaon-1 constituency.

Rizvi said aspirants can collect the nomination forms until 16 November as the deadline has been extended by two more days.

Many nomination seekers said they were happy to collect the forms but they were not sure of being able to contest the polls as the party will share many seats with the partners of its two alliances.

A substantial number of fresh faces collected forms on the first day to get parry tickets in their respective seats.

As the party did not disclose the list of the aspirants who collected the nomination forms, it could not be known from which seats the high-profile party candidates’ may contest the polls.

According to a party source, BNP standing committee member lawyer Moudud Ahmed is not going to contest the polls from his original home constituency Noakhali-5 to avoid facing archrival and Awami League general secretary Obaidul Quader.

“Madam (Khaleda) blessed us. She hopes we’ll be able to move ahead with the people’s unity we’ve forged,” Fakhrul told reporters.

Earlier, he said the country still lacks the minimum election atmosphere while their leaders and activists are being arrested continuously.

Fakhrul warned that their party may review its decision to join the election if the proper atmosphere is not created and the arrest of its leaders and activists does not stop.

Earlier on Sunday, BNP’s two alliances –Jatiya Oikya Front and 20-party– announced to participate in the upcoming 11th parliamentary elections as part of their movement to restore democracy, and demanded the election be deferred by one month.

The election commission on Monday deferred the 11th national election to 30 December from 23 December. 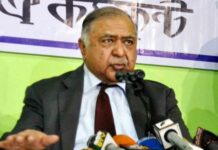 Four of a family can be bank directors; draft law cleared