The World Bank that pulled out of financing Padma Bridge, citing a never-proven “corruption conspiracy”, has now congratulated Bangladesh and its people on completion of the much-awaited bridge.

“We are happy that the bridge is complete and Bangladesh will benefit from it,” World Bank Country Director for Bangladesh Mercy Tembon told the media during the inauguration event on the Mawa end of the bridge on Saturday.

Now is the time to move Bangladesh-World Bank relations forward. The Padma Bridge will make a huge contribution to the economic growth of Bangladesh, she said.

“This bridge will contribute to accelerating integrated growth in the country and reducing poverty,” she added.

The World Bank, which initially agreed to co-finance the construction of Padma Bridge, cancelled its loan alleging corruption over the appointment of consultants for the bridge. The Washington-based agency had a loan deal amounting to $1.2 billion with Bangladesh for the project involving an initial estimated cost of $2.9 billion.

Other lenders, such as the Asian Development Bank, Japan International Cooperation Agency, and the Islamic Development Bank also backed out of financing the bridge, leaving the government quite off-guard and embarrassed.

But, neither a case by the Anti-Corruption Commission nor another in a Canadian court failed to prove the corruption allegations.

It was Prime Minister Sheikh Hasina who stood alone and decided to go ahead with the nearly $4 billion project with the country’s own funds.

The government took a challenge and proceeded with the self-financing plan, keeping aside money in the annual budget for the Padma Bridge project. The construction began in December 2015.

Dispelling all clouds of uncertainties, Prime Minister Sheikh Hasina finally on Saturday inaugurated the long-awaited Padma Bridge, the longest in Bangladesh, connecting people on both sides of the Padma River.

The Padma Bridge project has been implemented at a cost of Tk30,193.39 crore with almost 100% internal funding which is believed to bring a new world to the country’s economy by connecting 21 southwestern districts through roads and railways with the capital. 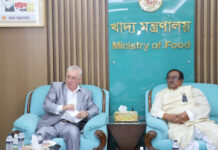 Koko’s body will be brought back Tuesday