The tenth parliamentary election in Bangladesh was held on 5th January 2014 – but, what kind of election was it?  Over half – 153 out of 300 – of the MPs were elected unopposed.  That means more than half of the voters of the country were deprived of their basic, constitutional rights.  This is unprecedented in the history of democracy.  In the rest of 147 seats, the actual turnout of voters on the Election Day was so low that it would not match the average percentage seen in a genuine election.  What is the point of discussing the percentage of votes when a State Minister’s son alone cast nearly 500 votes himself?  In more than 40 voting centres not a single vote was casted while in many centres, there were no queues of voters (which are usual in participatory election in Bangladesh) to be seen. Poling Officers and Presiding Officers were seen sleeping or sitting idle.  In many other centres, the Polling and Presiding Officers took responsibility for casting votes themselves, by their own hands (table casting).
To make these 147 MPs in a sham election, more than 180 people were killed between the day the election schedule was announced and the Election Day.
In this article, I shall try to analyse the parliamentary election held on 5th January 2014 in the eyes of Bangladesh constitution, democracy and international law.

Election and the constitution
Effective participation by the people in electing their representatives is the main essence of democracy.  In order to ensure effective participation and proper election of representatives, voters must have a choice of alternative candidates and must be able to express their mandate freely.  In a parliamentary system, the government is  accountable to, Parliament.  Whichever party has a majority of seats in the parliamentary election, its leader becomes Prime Minister. Was the parliamentary election held on 5th January a proper election in real sense?  Was there effective participation by the people?  Article 11 of the constitution of Bangladesh, inter alia, says “The Republic shall be a democracy…………in which effective participation by the people through their elected representatives in administration at all levels shall be ensured.” Parliament and the Cabinet drawn from it are, no doubt, the highest level of administration.  The election held on 5th January 2014 was not an effective participation by the people as envisaged by Article 11 of the constitution.
Furthermore, the constitution of Bangladesh itself clearly states how parliamentary elections are to be held in each and every constituency of Bangladesh.  There is no scope for allocating seats or sharing them among the parties – depriving the voters, the real source of power which gives the government its legitimacy, of a choice.  Article 62(2) of the constitution says “Parliament shall consist of three hundred members to be elected in accordance with law from single territorial constituencies by direct election….”  The election of 5th January 2014 was not an election where every member elected from single territorial constituencies by direct election as envisaged by Article 65(2) of the constitution.  The Prime Minister’s assertion that “if the BNP [Bangladesh Nationalist Party] came to the election we would have shared/divided/allocated seats with them as we did with Jatiya Party and other parties of the alliance” is not only undemocratic and against the principle of parliamentary democracy, it is also against the constitution of Bangladesh.
The various opinion polls and surveys conducted before the last election (by neutral newspapers, and even by those leaning towards the ruling party) clearly showed that around 90% people of Bangladesh were against the parliamentary election being held under a party government.  The current government has been violating the constitution at almost each and every step of their movement.  Dozens of concrete examples of gross violation of the constitution by the current government can be given.  Parliament was not dissolved: yet newly elected MPs took their oath, in violation of the constitution.  This effectively made nearly 600 MPs in Bangladesh for two weeks in place of the 300!  Yet the Prime Minister and her colleagues have often shamelessly said that elections were to be held because there was a constitutional obligation to do so.  The country’s leading constitutional experts (for example, Dr Kamal Hossain, Barrister Rafiq-Ul-Huq and Dr Shahdeen Malik, etc) said that if the Parliament was dissolved before 24th January 2014, the election could have been held within 90 days of such dissolution under Article 123 of the constitution.

A black day
5th January 2014 was a black day in the history of democracy in Bangladesh.  Many political scientists and philosophers throughout history have attempted to define the term ‘democracy.’  Among them, Abraham Lincoln’s definition has been widely accepted.  Democracy – as defined by Abraham Lincoln as “a government, of the people, for the people and by the people” – was dead in Bangladesh.  In a democracy, people’s wishes, desires and expectations matter most.  The current government of Bangladesh is not “of the people” of Bangladesh because the people could not freely participate in all constituencies on the mandate giving day.  Similarly, the government cannot be “by the people” because the people were deprived of their fundamental constitutional rights of voting.   If the government cannot be of the people and by the people, certainly it cannot be “for the people.”
Free and fair elections are the most important ingredient of democracy.  Without the former, the latter cannot be thought of. The relationship between democracy and free and fair elections was best summed up in an Indian case [(2002) 8 SCC 237]: “Free, fair … elections are part of the basic structure of the Constitution…Democracy and free and fair elections are inseparable twins. There is almost an in-severable umbilical cord joining them. The little man’s ballot and not the bullet is the heart beat of democracy.”

What the international law says?
Bangladesh is a member of the United Nations (UN).  As a member of the UN and an independent country, Bangladesh is a signatory to many international accords, agreements and laws.  Among those, the most important two documents are: the Universal Declaration of Human Rights (UDHR) and the International Covenant on Civil and Political Rights (ICCPR).  Article 21(3) of the UDHR says “The will of the people shall be the basis of the authority of government; this shall be expressed in periodic and genuine elections which shall be by universal and equal suffrage and shall be held by secret vote or by equivalent free voting procedures.” On the other hand, Article 25(b) of the ICCPR says, inter alia, “Every citizen shall have the right and the opportunity to vote and to be elected at genuine periodic elections which shall be by universal and equal suffrage and shall be held by secret ballot, guaranteeing the free expression of the will of the electors.”
As a signatory, Bangladesh has an obligation to fulfill the requirements of and comply with the Articles of the above two.  The election held on 5th January 2014 was in clear violation of Article 21(3) of the UDHR and Article 25(b) of the ICCPR, for it was not a genuine election and the electorates could not express their free will.  Thus, the will of the people was not the basis of the authority of the current government, for more than 50% voters were deprived from their voting rights.
The election held on 5th January was not a proper and genuine election in the eyes of constitution, democracy and international law.  The current government has no legitimate right to run the country.  Has the government obtained its mandate properly?  The election was completely flawed and the people could not express their will.  Nisha Desai, US Assistant Secretary of State for South and Central Asian Affairs, said in the US Senate Committee hearing on 11 February 2014 “On January 5, the government held a deeply flawed election in which one of the two major political parties did not participate.  As a result, over half of the 300 members of Parliament were elected unopposed, and most of the rest faced only token opposition.  The election did not credibly express the will of the Bangladeshi people.  This could have serious ramifications for stability in Bangladesh and the region.”
The US government issued a statement immediately after the election which, inter alia, said “the election was not a credible reflection of the will of the people and called for immediate dialogue to agree on new election as soon as possible.”  History tells us that when a government knows that they are not elected by the people, they can do anything to remain in office.  To such a government, the use of force, arrogance, empty rhetoric, violating human rights and curtailing people’s democratic rights become normal tools for running the country.  These symptoms are already present in Bangladesh.  Unless there is a credible and genuine election held to produce a proper democratic and accountable government, the current ongoing trends are bound to be worse.  The government will gradually turn into a ruthless dictator and ferocious oppressor.  The sooner the people of Bangladesh, its civil society and the international community realise this, the better for the country and its people.
The writer is a legal expert, analyst, and columnist.  He can be contacted via e-mail: ahmedlaw2002@yaho.co.uk 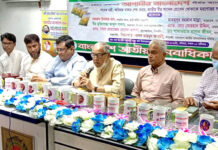 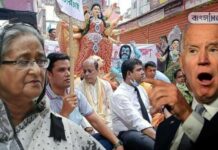 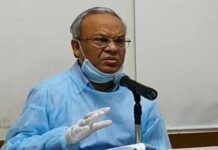