oath as members of parliament or MPs.

They wrote to the Speaker for taking oath on Mar 7, Ahmed told bdnews24.com.

In the Dec 30 polls, Sultan Mansur was elected from the Moulvibazar-2 seat with the ticket of the Jatiya Oikya Front under the paddy sheaf symbol while, Mukabbir Khan ran under the rising sun of his party.

The Awami League won 257 seats in the polls and formed its third consecutive government. The BNP and its allies, including the Gono Forum led by Kamal Hossain, won only eight seats.

The Jatiya Oikya Front, which includes the BNP, has boycotted the results of the polls and has called for a new election. The elected BNP leaders have not taken their oaths since the Election Commission rejected their calls.Both Sultan Mansur and Mukabbir Khan are Gono Forum Presidium members, and they are also on the Jatiya Oikya Front Steering Committee.

Dr Kamal initially took the interests of the two leaders of his party as ‘positive’, but changed his tone after a meeting with the BNP leaders.

After the meeting on Jan 31, he said, “Both of them have clearly been informed about the party’s decision that it will not take oath.”

On the decision of the party, Sultan Mansur told bdnews24.com on Saturday night, “Leave the party’s decision. Give priority to those who have elected us by vote. ” 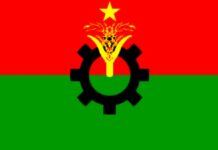 BNP spends more than its income