Remittance inflow in Bangladesh is expected to see a record rise this year in the wake of recent reopening of labour market by Saudi Arabia and global economic recovery, says a World Bank report.

However, the country slipped one notch to eighth position, pulling US$15bn from its global migrant workers, among the top most 10 remittance-earning countries in the world, despite its 8% rise in remittances during the period, according to World Bank’s Migration and Remittances: Recent Developments and Outlook, which was released last week.

Migrants’ remittances to the developing countries are estimated to have reached at $436bn in 2014, a 4.4% increase over 2013 level and remittances to South Asia rose by an estimated 4.5% in 2014, compared to 2.5% in 2013, driven by sharp increases in remittances to Bangladesh, according to the World Bank study.

In line with the expected global economic recovery next year, the global flows of remittances are expected to be accelerated by 4.1% in 2016, to reach an estimated $610bn, rising to $636bn in 2017.

Remittance growth in South Asia region is projected to remain flat at 3.7% in 2015, supported by large scale construction activities (including preparations for the 2022 FIFA World Cup in Qatar) and fiscal expansion in GCC countries and improving economic prospects in the United States.

“The resumption of migration of Bangladeshi workers to Saudi Arabia also portends well for remittance growth in that country,” said the study.

Fall in oil prices does not appear to have reduced remittances from the Gulf Cooperation Council (GCC) members, especially to India, Bangladesh, Nepal, Pakistan, and several countries in the Middle East and North Africa.

“Remittances to South Asia Region grew despite concerns that lower oil prices might dampen remittance flows from the GCC countries. This may reflect the concentration of the region’s migrant workers in the construction and services sectors, which are relatively less affected by falling oil prices.”

Remittances remain a significant contributor to the economy of the country as it accounted for more than 6% of GDP and 77% of forex reserves.

The Bangladeshi diaspora has the largest diaspora savings, among the low-income countries, with savings of about $9.5bn as bank deposits in destination countries. These savings build a strong case for issuance of diaspora bonds, that can be issued by the Bangladeshi government like other countries—India, Philippines, Sri Lanka, Kenya, Ghana, Nepal and Ethiopia.

The remittance inflow stood at $11.25bn in the first nine months (July-March) of the current fiscal year, an increase of over 7% in the same period a year earlier, according to the Bangladesh Bank.

In the last fiscal year, the remittance was $14.23bn, which is 1.61% down from the previous fiscal year’s $14.46bn due to the political turmoil and stagnant situation in manpower export.

“Stable exchange rate of the local currency against US dollars was one of the main drivers for the increased remittance inflow in the country,”said an official of the central bank.

The global average cost of sending $200 held steady at 8% of the value of the transaction, as of the last quarter of 2014.International remittances sent via mobile technology accounted for less than 2% of the remittance flows in 2013, according to the latest available data. 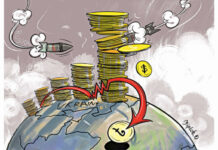 Relief on the way for Covid-hit taxpayers: Offer another opportunity to legalise ‘undisclosed’ money