Muhammad Shafiqul Islam, a bank teller, was on his way home from work in Dhaka late last week when political agitators hurled incendiary bombs into the bus he was riding.

“There was a flash and I saw fire all around me. People were screaming,” said Mr. Islam, who suffered serious burns over nearly 30% of his body, including his face and arms. “Now I doubt there is a future here.”

Violence is surging across Bangladesh as a deepening political crisis threatens to derail this impoverished South Asian country’s fragile democracy and set back hard-won gains in economic development.

At least 45 people have died since the opposition Bangladesh Nationalist Party and its allies began blockading roads, ports and railways 10 days ago, seeking to force Prime Minister Sheikh Hasina to resign ahead of national elections in January.

They are also boycotting the election unless a neutral caretaker administration is appointed to oversee it, contending that if Ms. Hasina remains in office, the vote won’t be fair. 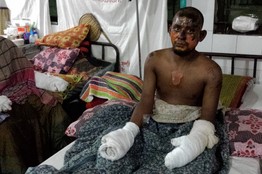 So far, Ms. Hasina has shown no interest in stepping down. She has vowed to go ahead with the balloting even though her Awami League and its allies are practically the only parties fielding candidates.

On Thursday, her electoral effort suffered another blow when a former coalition partner, led by former president Hussein Muhammad Ershad, said it wouldn’t participate in the vote either. “There is no level playing field,” said Mr. Ershad.

“It’s difficult to see how the election, if it goes ahead, can have credibility in Bangladesh or in the eyes of the international community,” said Shahiduzzaman, a political analyst at Dhaka University who uses a single name.

The U.S. and other countries have pushed for negotiations and a United Nations special envoy is set to mediate between Ms. Hasina and Khaleda Zia, leader of the opposition BNP this weekend.

But the two sides’ positions appeared to be hardening.

Ms. Hasina, the daughter of Bangladeshi independence leader Sheikh Mujibur Rahman, and Ms. Zia, the widow of a military commander in the war for independence, have been bitter political enemies for years.

But in some ways, the current impasse goes beyond that to the heart of national identity in Bangladesh, where people are torn over whether to define themselves by their Muslim heritage first, or by their Bengali language and culture.

The Awami League champions what its supporters say is a more secular Bengali identity, while the BNP is a proponent of a Bangladeshi nationalism that draws heavily on a South Asian Muslim legacy.

The opposition coalition includes the Islamist Jamaat-e-Islami party and is backed by other conservative Muslim religious groups who say Ms. Hasina’s government has been hostile to Islam.

Such groups could gain a stronger voice in national affairs if the opposition were to win power.

War-crimes trials initiated by Ms. Hasina against Islamist leaders who sided with Pakistan and opposed the creation of Bangladesh during the country’s 1971 war for independence have helped put religion back on the political agenda.

Ms. Hasina’s government has conducted an intensifying crackdown on its opponents this year as her term has approached its end.

Thousands of opposition activists as well as more than a dozen top BNP leaders have been jailed. The BNP headquarters in Dhaka is ringed by police. Security forces recently arrested the party spokesman.

The new spokesman is hiding to avoid arrest and issues daily statements on video.

Police have also detained prominent government critics, including a leading human-rights campaigner and a newspaper editor. Three television stations, an opposition-leaning newspaper and news websites have been shut down.

Abdul Awal Mintoo, a well-known businessman and BNP backer, was arrested along with four others when leaving Ms. Zia’s home last month. His family said he had been trying to arrange talks between Ms. Zia and Ms. Hasina.

So far, he hasn’t been charged with any crime. Police said they are investigating whether he was involved in an attack on a train station. “It’s a political arrest,” said his son, Tabith M. Awal. “How can there be compromise and dialogue like this.”

Instead, the two sides are increasingly clashing in the streets. Riot police and border guards confront protesters throwing rocks and Molotov cocktails daily. The authorities often respond with tear gas and rubber bullets.

Opposition activists say demonstrators have been shot and killed by regular bullets. Police have confirmed using regular bullets in some places but haven’t made public the number of people killed by gunfire.

On Wednesday, saboteurs tampered with railroad tracks in northern Bangladesh, causing a passenger train to derail, killing three people. There have also been numerous attacks on buses, private cars and trains, which police have blamed on supporters of the opposition blockade.

Shamsher Mubin Chowdhury, a senior BNP leader, denied his party’s activists were involved in acts of violence, saying: “Our programs are peaceful.” He said government agents were carrying out attacks to undermine the opposition, something the government denies.

Mr. Chowdhury said: “the government has lost its legitimacy and lost control of the country.”

The attack on Mr. Islam’s bus in Dhaka last week killed three people and injured 19 others. He said he worried about traveling during protests, when people in vehicles are targeted. But, he said, he had no choice but to go to work or risk losing his job.

Mr. Islam said that after the bombs hit, the bus crashed into the median and he stumbled out. He was taken to the hospital in a rickshaw. “I was thinking, I have to survive for my family,” said Mr. Islam, 30 years old, who is married and has an infant son.

“My father fought for this country in 1971, but now it is common people like us who are suffering,” he said. “I look forward to the day when a new generation will do away with this kind of unhealthy politics.”