Mid-term poll will not happen, Dissolving RAB not possible Echoing Law Minister Anisul Huq’s statement that Jamaat-e-Islami cannot be tried now under the tribunal law as it lacks a provision, Prime Minister Sheikh Hasina said yesterday that her cabinet colleague was correct on legal grounds.

“Our minister has said the right thing. A writ [on Jamaat’s registration] is pending with the higher court. And the government has nothing to do until judgement of the case is delivered. Two similar cases cannot run simultaneously,” Hasina said, adding that there was no reason to create a hullabaloo over the matter.

The premier also criticised the campaigners who were demanding a ban on Jamaat’s politics for its anti-liberation role, stating: “…now they are loud about banning Jamaat politics. What role did they play when Jamaat was allowed to do politics after the killing of the father of the nation? Why are you asking me, rather than finding out who allowed Jamaat to do politics?”

She said this in reply to reporters’ questions during a press conference at her official residence, Ganabhaban, yesterday. The press conference was organised to brief reporters about her visit to Japan last week.

At the press meet held for around one and a half hours, Hasina elaborated the achievements of her government and answered the reporters’ questions on contemporary issues of the country as well as abroad.

Hasina, who is also the chief of ruling party Awami League, indirectly rejected the BNP’s demand for a mid-term election, saying that the government would continue the ongoing development projects.

“The government has taken some major projects including the Padma bridge…I want to complete the development projects,” she said.

“If you want it, we will arrange an election. But who will be benefited for this? Those killers and corrupts will come to power,” Hasina said. “Is there any guarantee that all parties will participate if a mid-term election is arranged?”

The premier said: “I know there is no one who can work for the country’s development with sincerity like me, because I was born in Bangladesh.”

Criticising BNP chief Khaleda Zia’s stand not to join the January 5 general election, Hasina questioned the person who had advised her that the election would not be held.

Answering another question that referred to a recent statement Khaleda made, terming the January 5 election as well as the government “illegal,” the prime minister questioned whether the BNP’s formation had been legitimate.

Bringing up the history of BNP founder Ziaur Rahman’s assuming of office during the post-1975 period, Hasina said: “Who is questioning the government’s legitimacy? What legitimacy do they have? The legitimacy of their birth is questionable.”

She also said the constitution had provisions for uncontested elections.

In another recent comment, Khaleda said: “The present government has gone all rotten. Let it rot a little more, and then our movement to uproot it will begin.”

When the premier’s attention was drawn to this comment, she said: “The BNP itself has become rotten by not participating in the January 5 election. Now we have kept the party fresh by using formalin.”

On the death of a BGB member and gunfire at the Myanmar border, the premier said they had taken the necessary action and the problem would be solved soon.

Replying to another question relating to her previous statement that the Jamaat-Shibir men were carrying out mayhem by intruding in her party, Hasina said there were some people who always belonged to the government party. “After a government takes office, they become the government’s party by changing their banners,” she said.

Some members of her party had picked them in order to strengthen their own groups, Hasina said adding that now the government had to pay for their misdeeds.

Referring to the Narayanganj seven-murder accused Nur Hossain’s political identity, the premier said Nur belonged to Jatiya Party at the time of HM Ershad. In 1991, when the BNP came to power, he had joined the BNP, and after 1996, he joined the Awami League.

Mentioning her strong stance against the killers, Hasina said she would not spare the culprits, no matter what their political identity.

“We are taking action against the criminals. But had the BNP been in power now, they would not have done so,” she said.

Defying Khaleda’s demand to dissolve the elite force Rapid Action battalion (RAB) for its alleged involvement in extra-judicial killings, abduction and forced disappearance, the prime minister said it was not possible.

“Now RAB is a reality and it is not possible to dissolve the force all of a sudden since the battalion has been in operation for a long time,” said Hasina said.

Hasina, who opposed RAB’s formation in 2004 and publicly condemned its extra-judicial killings while in opposition, said no one made a point when she had protested its activities, especially the killing of opposition activists.

“You have lauded the battalion’s role when I raised my voice after the killing of more than 1,000 people after its formation,” the prime minister said adding that her government had taken measures to bring the RAB members involved in criminal activities to the book.

Mentioning her firm stance in trying the war criminals, the premier said she had received many phone calls from various quarters, including UN Secretary General Ban Ki-moon and US’s John Kerry to stop the execution of war criminal Abdul Quader Molla’s death penalty.

“Who dared ignore the phone calls? It is I, the daughter of Bangabandhu [Sheikh Mujibur Rahman]. I work for the country and will do whatever is good for the country,” she said adding that the trials would continue.

Describing her achievements in the Japan visit, the premier said her major success in the visit was to get a promise of $6bn for Bangladesh’s development within the next five years.

She said her government had already chalked out few projects to be implemented by the promised fund.

Hasina was also hopeful about more Japanese investment in Bangladesh. 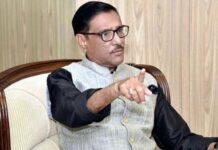 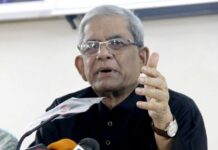 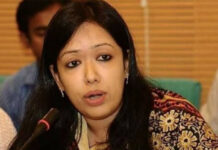 Abbas supporters scared away by police during campaign

‘PM, HM will have to take responsibility’