Mahmudullah Riyad hit an unbeaten 51 to guide his side to a five-wicket victory at the BKSP in the first of the three intra-squad practice matches against Tamim XI today. Mahmudullah reiterated that it was a good day for the bowlers while also saying that they were confident of winning the upcoming ODI series against the West Indies.

The series against the West Indies is set to be Bangladesh’s first international assignment following the outbreak of coronavirus pandemic. The key factor in the practice match was to get back good sensations and the performances from the bowlers gave Riyad positive signs.

“There was some movement in the wicket early on and pitch got better in the second half. Overall it’s a good practice match,” Riyad said after the match.

“Our bowlers bowled in good areas with the new ball. We picked up a few early wickets and they were perhaps under a bit of pressure. Overall both teams’ bowlers bowled well and it was bowlers’ day today.”

“Shakib’s run-out was a bit unfortunate as it hit the batsman at the other end and went to the bowler. Under normal circumstances it would have been an easy run.’ Riyad said.

The overall sensations were good for Mahmudullah and he said the team was confident ahead of the series against the West Indies.

“Our preparation is going well and we’re very positive and will play some good cricket. I hope we will win this tournament.”

Bowlers from both sides put in encouraging performances with youngster Hasan Mahmud bagging four wickets for Riyad’s side.

Mahmudullah won the toss in the morning and sent Tamim XI in to bat. Pacers caused problems as Al Amin Hossain and Hasan Mahmud made inroads picking up openers Liton Das (2) and Tamim (23) respectively early on during the match. The middle-order of Najmul Hossain, Mohammed Mithun Soumya Sarkar and Afif Hossain got starts but failed to carry on as pacer Shoriful Islam picked up two wickets for 27 runs while youngster Hasan Mahmud returned impressive figures of four for 21 in his six overs. Afif’s 32-ball 35 was the team-high score as they were bundled out for 161 in 37.2 overs.

The Tigers’ next two practice games will take place on 16th and 18th January before the first of the three ODIs against West Indies on the 20th. 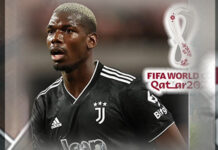 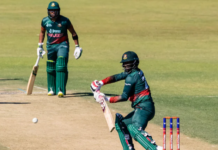 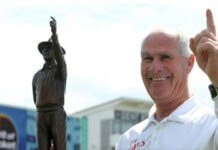 Shakib hopeful of being fit for Zimbabwe tour