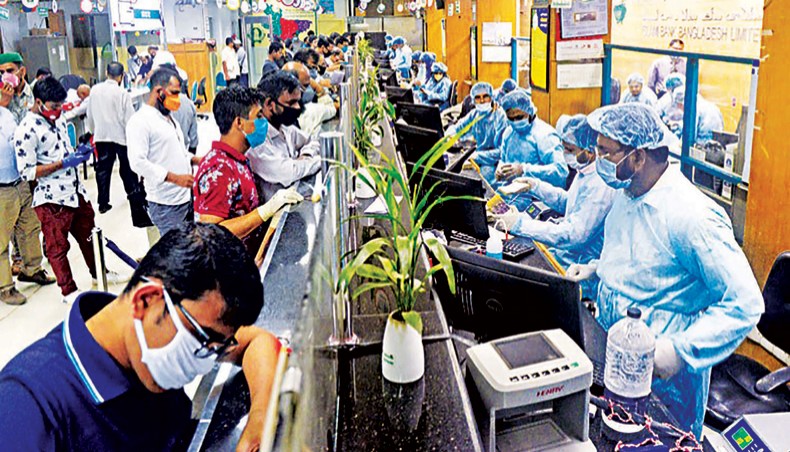 A file photo shows clients queuing up while officials in protective gears giving services at a branch of a private bank in the capital amid the coronavirus outbreak in the country. The number of bank accounts with more than Tk 1 crore in deposits has remained as high as 82,625 at the end of March this year amid the outbreak of the coronavirus in the country on March 8.— New Age photo

The number of bank accounts with more than Tk 1 crore in deposits has remained as high as 82,625 at the end of March this year amid the outbreak of the coronavirus in the country on March 8.

However, the number of such accounts witnessed a fall of paltry 1 per cent or 1,214 in the January-March quarter compared with the October-December period.

Along with the decline in the number of accounts, deposits in those accounts also observed a downward trend in the first quarter of 2020.

The deposits in such accounts dropped by 2 per cent, or Tk 11,119 crore, to Tk 5,15,878 crore at the end of March this year against Tk 5,26,997 crore in deposits in those accounts three months ago, as per the Bangladesh Bank data.

Considering the number of bank accounts in the banking sector, such accounts represent 0.075 per cent of the country’s 11.05 crore bank accounts.

These accounts constitute a tiny portion of the country’s total bank accounts but hold almost half of the total deposits in the banks.

The number of banks with more than Tk 1 crore in deposits and the deposits in those accounts have been on the rise for long.

The fact that a significant portion of bank deposits are held by a small percentage of the population hinted that the rich were becoming richer and the poor poorer, raising concerns over possible social grievances and deterioration in the law and order situation.

According to the BB data, the number of accounts with deposits of Tk 1 crore has increased more than four times or by 62,989 in the last eleven years.

While a tiny section of people was in possession of almost half of the cash in the country’s banking sector, a large section of the remaining population struggled hard to survive following the outbreak of the coronavirus.

The average income of the urban slum dwellers and the rural poor has dropped by more than 80 per cent following the coronavirus outbreak in the country, according to a joint survey of the Power and Participation Research Centre and BRAC Institute of Governance and Development.

Some 40 per cent of the poor population and 35 per cent of the vulnerable non-poor have already reduced their food consumption to cope with the situation, the survey found.

Bangladesh’s current score on the Gini index is 495 which reflects the fact that the country’s rich people are becoming richer and the poor poorer.