200,000 said to be already in attendance; thousands more streaming in

Islamist group Hefajat-e-Islam Bangladesh’s much-hyped rally began at Shapla Chattar in the capital’s Motijheel area on Saturday morning, aiming to push for its 13-point demand, including punishment of the bloggers who reportedly denigrated Islam and Prophet Muhammad (pbuh).

The rally formally kicked off around 10.00am with recitation from the holy Quran with Hefajat-e-Islam’s Dhaka city unit ameer Moulana Nur Hossain Kashemi in the chair.

Leaders from different tiers of Hefajat-e-Islam are addressing the rally with thousands of its supporters still pouring in.

Hefajat sources said its ameer Moulana Ahmed Shafi will announce fresh action programmes from the rally to realise their demands and protest the obstruction of their peaceful programme.

According to intelligence sources, about two lakh activists of Hefazat-e-Islam thronged the area stretching over Dainik Bangla intersection, Ittefaq crossing and the Notre Dame College road.

Several thousand activists of Hefazat-e-Islam started for Mothjheel from several parts of the city after Fajr prayers.

On the other hand, supporters of hartal called by 25 pro-liberation organisations, obstructed a procession of Hefazate-Islam when they reached Gabtali area on their way to Motijheel around 7.00 am.

The Hefazat-e-Islam activists then sat down on the road and chanted Islamic slogans.

Several crude bombs were also exploded in the area.

Later, they restarted their journey to Motijheel at about 9.00am.

The Hefazat-e-Islam called the long march programme towards Dhaka to press home its 13-point demand, including arrest and trial of bloggers who ‘defamed’ Islam and Prophet Muhammad (pbuh). 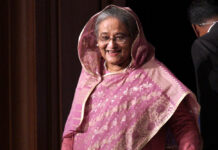 Man gets seven years in jail for distorting PMs photos 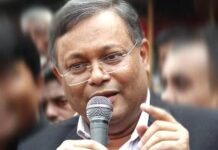