US envoy also calls for dialogue between political parties US Ambassador-designate to Bangladesh Marcia Stephens Bloom Bernicat has said the parliamentary elections of January 5 were ‘undeniably flawed’.
“Bangladesh’s main political parties urgently need to engage in constructive dialogue that leads to a more representative government,” she said while giving her testimony before the US Senate Committee on Foreign Relations on Thursday.
“If confirmed, I’ll work hard to support efforts to promote accountability and strengthen human rights and democracy in Bangladesh,”
Bernicat, currently deputy assistant secretary in the Bureau of Human Resources at the Department of State, said the United States remains concerned about recent trends in democracy and human rights in Bangladesh.
Throughout the tense lead-up to and aftermath of the elections, the US Embassy in Dhaka worked closely with law enforcement and security counterparts to ensure protection of personnel and facilities, she said.
She said the US remains concerned about attacks on religious and ethnic minorities, political violence, and extrajudicial killings allegedly committed by security forces.
“If confirmed, I’ll work with the government, civil society and Bangladeshis of all walks of life to ensure an environment that encourages the broadest and fairest participation,” Bernicat said.
She mentioned that she would passionately advocate policies that enshrine peaceful democratic values, including respect for human rights and diversity, room for civil society to flourish, space for the free and peaceful discussion of political differences unmarred by violence, and adherence to the rule of law by an independent judiciary.
“We’ll also continue to support the right of impressive Bangladeshi civil society organizations to operate independently and to express their views openly, recognising that such institutions play an important role in any flourishing democracy,” she added.
Bernicat said the United States supports bringing to justice those who committed atrocities in the 1971 war, but those trials should be fair and transparent, and in accordance with international standards.
On the issue of Grameen Bank, she said they encourage the government to ensure the continued effectiveness of Grameen Bank and protect its unique governance structure.
“The most serious responsibility of any Chief of Mission is to ensure the safety and security of our staff abroad,” she mentioned.
Bernicat will succeed incumbent Ambassador Dan W Mozena. 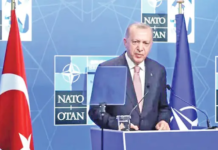 Democracy in Peril in Asia

THE ROLE OF FOREIGN DIPLOMATS IN DHAKA