President Obama has hailed the support of Arab nations in air strikes on Islamic State (IS) militants, saying: “This is not America’s fight alone.”

He was speaking hours after the US and Arab allies launched their first air strikes against IS in Syria.

Activists say at least 70 IS militants and 50 other al-Qaeda-linked fighters were killed in the strikes.

US state department spokeswoman Jan Psaki said the US had warned Syria in advance “not to engage US aircraft”.

But she added that Washington had not requested permission or given advance notice of the timing of the attacks.

President Obama confirmed that Saudi Arabia, the United Arab Emirates, Jordan, Bahrain and Qatar had taken part in or supported the strikes.

He said the US was “proud to stand shoulder to shoulder with these nations”.

President Obama: ”We’re going to do what’s necessary to take the fight to this terrorist group”

The Pentagon said warplanes, drones and Tomahawk cruise missiles were used in the strikes.

IS has seized large areas of Syria and Iraq, and the US has launched nearly 200 air strikes in Iraq since August.

But Monday’s strikes expanded the anti-IS campaign across the border into Syria for the first time. 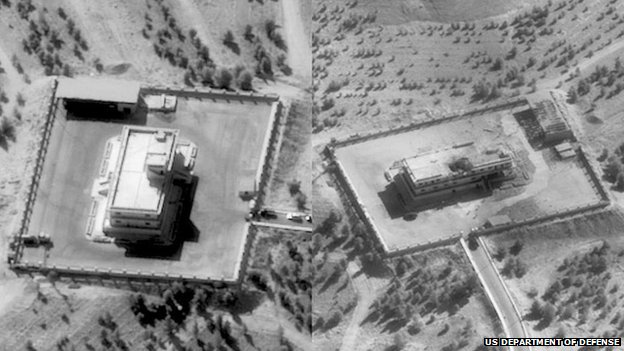 Before and after: The US defence department says this was the first time an F-22 stealth fighter was used in a combat role 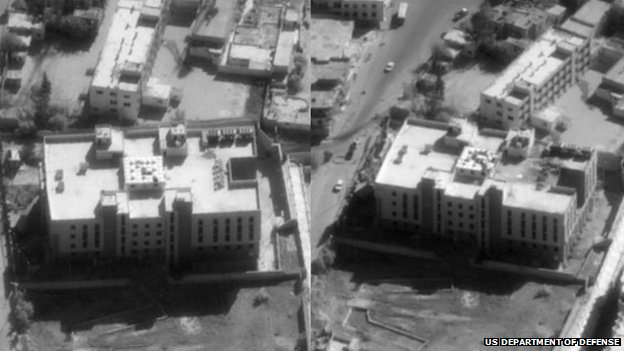 Before and after: A Tomahawk missile struck the Islamic State’s financial centre 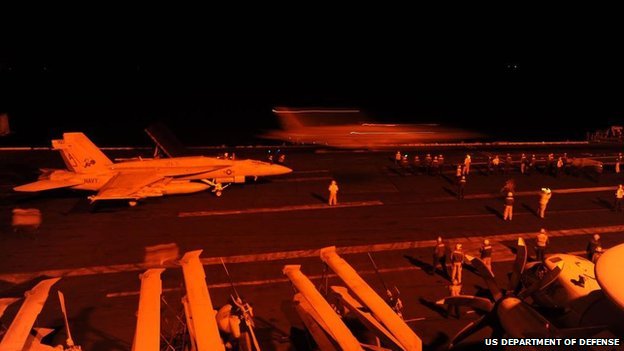 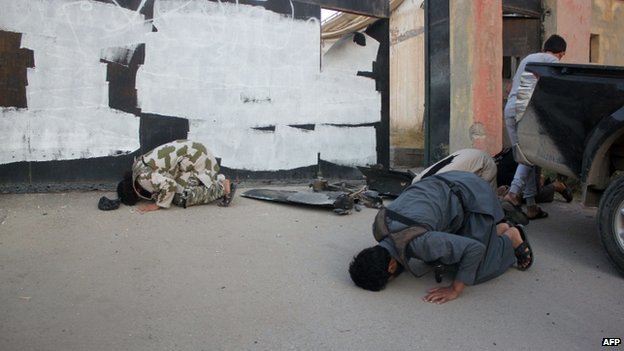 The strikes targeted the group’s main headquarters in its stronghold of Raqqa, north-eastern Syria.

IS training compounds, vehicles and storage sites were also hit in several other areas.

US fighter jets carried out the first set, with the Arab nations participating in the second and third waves, he added.

Tomahawk missiles were just one element of the attack, as Richard Lister reports

Later on Tuesday, US Secretary of State John Kerry said the US would not “allow geography or borders” to prevent action against IS militants.

“We will hold them responsible for their grotesque atrocities,” he said at the United Nations in New York, flanked by Iraq’s president and foreign minister.

“We will not tolerate safe havens for terrorists who threaten our people,” he said.

“I also note that the strikes took place in areas no longer under the effective control of that government,” he told reporters at the UN headquarters in New York.

US officials say the group had been plotting “imminent attacks” against the West, and had established a safe haven west of Aleppo.

President Obama warned that the operation against IS would take some time, but that he would do “what is necessary” to defeat the extremists.

Secretary of State John Kerry said Turkey had pledged to take part in a US-led coalition against IS following the release of 46 Turkish hostages on Saturday, AFP reports.

The Pentagon set out three broad groups of targets arranged in an arc across northern Syria.

Those closest to the Mediterranean coast seem to have been hit largely by Tomahawk cruise missiles launched from warships – this is an area where Syrian government air defences may still have coverage.

In a briefing Lt Gen William Mayville noted that Syrian air defences were “passive”, as he put it, during the course of the operation.

This suggests a conscious decision by Syrian commanders who perhaps feared that active scanning by their defences might draw down air attacks upon them.

The operation was notable for involving aircraft from Jordan and from Washington’s Gulf allies. It also marked the first use in combat of one of the USAF’s most modern aircraft, the F-22 Raptor.

This, the Pentagon is stressing, is just the start of “a sustained air campaign”, the tempo of which, says a Pentagon spokesman, “will be dictated by facts on the ground”. 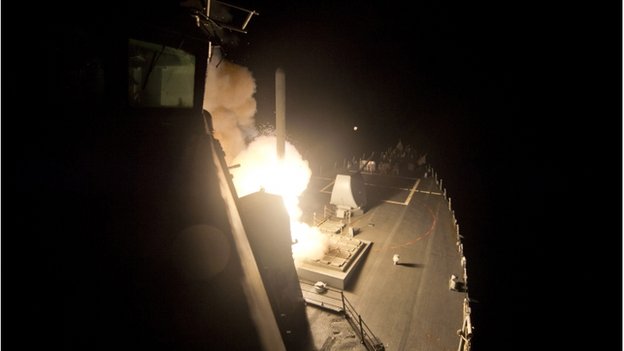 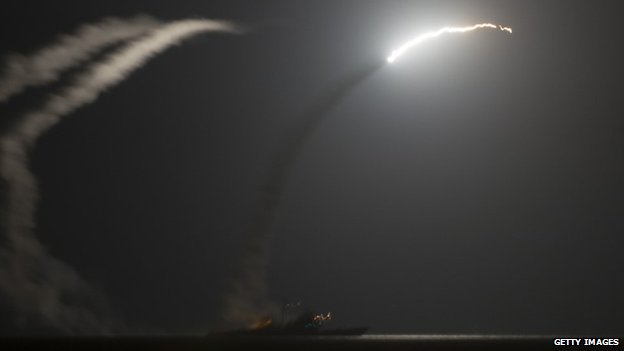 “Syria will continue to resolutely fight the war it has been prosecuting for years against… terrorism,” he said, after meeting with Iraqi Prime Minister Haider al-Abadi in Damascus.

Analysts say it is significant that countries with a Sunni majority, like Jordan and Saudi Arabia, are among those supporting US efforts against IS.

IS members are jihadists who adhere to an extreme interpretation of Sunni Islam and consider themselves the only true believers.

Around 2,000 Bangladeshis stuck in Turkey