The 136th Inter-Parliamentary Union Assembly ended on Wednesday with the adoption of Dhaka Declaration calling for immediate action to end inequality and resolutions on stopping extremism and financial help to terror organisations and more financial inclusion of women.
It also took a resolution seeking urgent international action to save millions of people from famine and drought in parts of Africa and Yemen.
The five-day assembly in Dhaka also took a resolution on the role of parliament in respecting the principle of non-intervention in the internal affairs of states, promoting enhanced international cooperation on the SDGs, financial inclusion of women in particular.
The assembly unanimously passed the Dhaka Declaration, said the assembly president speaker Shirin Sharmin Chaudhury at the concluding session of the assembly at Bangabandhu International Conference Centre.
Later Shirin and IPU president Saber Hossain Chowdhury, IPU secretary general Martin Chungong at the concluding press conference dubbed the assembly as successful for taking important resolutions.
Extreme inequalities that came at a high cost to society, stalling economic progress, undermined the democratic process and social cohesion and increased the risk of violence, said the Dhaka Declaration titled ‘Redressing inequalities: delivering on dignity and well-being for all.’
Expressing concern, it said that while income and wealth were disproportionately concentrated in the top 1-10 per cent of the global population, a growing number of people around the world, particularly young people, were unemployed or under-employed and underpaid, lacked productive assets and had limited access to education, health care and other social services.
‘People are denied the opportunity to flourish to the maximum of their individual potential and in accordance with their human rights; large sectors of the population lose purchasing power, stalling economic growth; power and wealth concentrated in a few hands undermine social cohesion and the very viability of the democratic process, increasing violence and insecurity,’ said the declaration.
‘Many of our countries are already at this point, and many more will be soon, unless we take resolute, concerted action,’ it said.
To reduce inequalities, efforts are needed at national and international levels, including strengthening legal
frameworks, making parliaments more representative, making the economy work for all, strengthening social dialogue and human capital and improving international cooperation, it said.
It calls for ensuring that all laws and budgetary allocations promote the human rights of all, uphold the rule of law and the principle that all people are equal under the law regardless of social status or personal wealth and enact laws and regulations to facilitate the participation of all citizens, including the most vulnerable and marginalised, in the political process as well as their access to elected office.
The resolution on non-intervention in the internal affairs of states urged all states to work towards denying extremist organisations resources, whether human, military or financial.
It also underlined the role of parliaments in preventing external intervention that threatened states’ sovereignty and independence and further urged parliaments to establish national legal bases and mechanisms to prevent or counter external intervention in the internal affairs of independent states.
While the resolution on more financial inclusion of women as a driver of development called on parliaments to take all appropriate measures to remove legal provisions that discriminated against women in areas such as work, family, property and inheritance, as a key step in addressing the gender gap in financial inclusion.
In the resolution on famine the assembly urged the governments concerned to end hostilities and
take every step to ensure unhindered humanitarian access to save millions of people from famine and drought in parts of Africa and Yemen.
In an emergency item adopted also urged participants and member countries to pressurise their governments to fund humanitarian relief operations to avert this crisis.
Prime minister Sheikh Hasina, also the leader of the house, inaugurated the international parliamentary moot at a programme at the South Plaza of parliament complex on April 1. Assembly was participated by more than 650 lawmakers, including 45 speakers and 37 deputy speakers, from 131 countries.
This was the biggest international event in the country so far and about 1,350 delegates from different countries and international organisations took part in it.
Next assembly of IPU would be held in Russia in October. 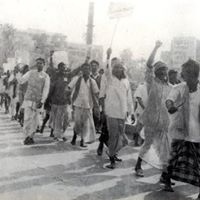