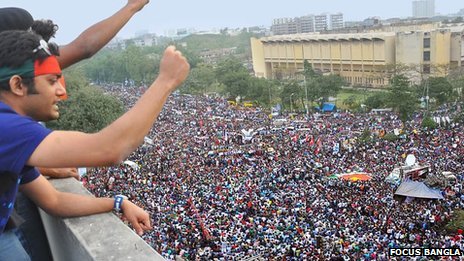 Hundreds of thousands of Bangladeshis have joined protests in Dhaka to demand the death penalty for a political leader convicted of war crimes.

Protests have grown since Abdul Kader Mullah was given life on Tuesday for crimes including torture, murder and rape during the 1971 independence war.

Supporters of Mullah’s party, the Islamist Jamaat-e-Islami, held protests calling for his release.

The party says Mullah is the victim of a political vendetta.

Ten others are on trial, including eight other Jamaat members and two members of the opposition Bangladesh Nationalist Party (BNP), one a former minister.

They are accused of atrocities during the 1971 war when Bangladesh, then called East Pakistan, fought to secede from Pakistan.

The authorities say the defendants opposed independence and either fought alongside or actively supported the West Pakistan authorities.

Prime Minister Sheikh Hasina has made prosecuting war crimes a key goal of her government.

Jamaat is an ally of the BNP, Sheikh Hasina’s bitter political rivals.

Mullah is the second defendant to be found guilty by the special tribunal.

Thousands have been holding vigils in Dhaka throughout the week calling for a ban on the J-e-I and the death penalty for party leaders on trial, on the grounds that they were involved in mass killings.

The organisers called for a grand rally on Friday, a weekend day in Bangladesh, to urge the authorities to reconsider Mullah’s life sentence.

Protesters used social media to boost numbers at the rally.

The BBC’s Anbarasan Ethirajan in Dhaka says there has been an unusual outpouring of feeling.

People from all walks of life, with doctors, professors and even sports personalities taking part in what is described as the biggest protest march in recent years, he says.

Shahbag Square in Dhaka has a festive look, with people holding various cultural events as part of the protest, our correspondent adds.

“We will not return home unless we get justice, complete justice,” Shakil Ahmed, a college student, told the Associated Press news agency.

“I did not see 1971, but those who killed our people and helped Pakistani troops in their effort to halt the creation of Bangladesh should be hanged.”

Mullah, 64, the assistant secretary general of Jamaat, was found guilty of being behind a series of killings.

They included massacres in the Mirpur area of Dhaka that earned him the nickname “koshai [butcher] of Mirpur”, and made him one of the more feared Jamaat leaders.

Official estimates say more than three million people were killed in the 1971 war.