From the airport, the BNP leader’s body was taken to his Mohakhali DOHS residence.

Later, his body will be kept at Combined Military Hospital (CMH) mortuary. It will be there overnight on Wednesday.

Hannan Shah, a military officer-turned politician, died at Raffles Heart Centre in Singapore early Tuesday at the age of 77.

On 11 September, he was flown to Singapore for better treatment of his cardiovascular disease.

The BNP leader’s first namaz-e-janaza was held at a mosque in Singapore at 8:30pm (Singapore time) on Tuesday.

His second janaza will be held at Mohakhali DOHS mosque about 10:00am on Thursday, while the third one at the South Plaza of the Jatiya Sangsad around 11:00am and the fourth one in front of BNP’s Naya Paltan central office after zuhr prayers.

Hannan Shah’s body will be taken to Gazipur on Friday where his three janazas — one at Joydebpur Rajbari ground at 9:00am, another at Kapasia Pilot High School ground around 10:00am and the last one at Gram Chala Bazar High School ground after jumma prayers — will be held, and then be buried at his family graveyard in Kapasia.

He was born in Kapasia’s Ghagtia in 1939. His father Fakir Abdul Mannan was a minister of the Pakistan government from 1965-68.

After his retirement from Bangladesh Army, Hannan Shah joined BNP in 1983 and was made Dhaka city unit BNP’s joint convener, and inducted into the cabinet when BNP came to power in 1991.

He had also been elected MP twice from Gazipur-4 constituency. 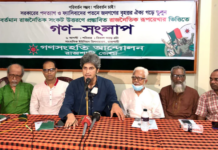 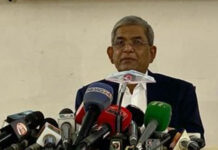 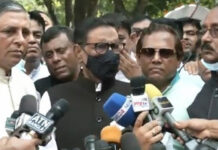 Ershad to Khaleda: Why didn’t you try Zia’s killers?