Bangladesh government has created a scope for three leading mobile operators to earn additional combined monthly revenue of around Tk 387 crore by introducing unified minimum rate of Tk 0.45 per minute, leaving the subscribers to feel the pinch of increased call rate.
Four mobile phone operators, following a directive from the Bangladesh Telecommunication Regulatory Commission (BTRC) on Monday, implemented the new tariff rate, ranging from Tk 0.45 to Tk 2 per minute, on Tuesday, scrapping the provision of separate floor price for on-net and off-net of Tk 0.25 and Tk 0.60 respectively.
While many of the subscribers are complaining that the cost of their calls increased in last two days mainly because of the hiking of floor price to Tk 0.45 from Tk 0.25, a BTRC estimate shows that mobile operators Grameenphone, Banglalink and Robi will make a windfall revenue increase while state-run Teletalk will incur losses.
The BTRC estimate placed before the government shows that compound monthly revenue of three mobile phone operators — GP, Robi and Banglalink — will increase by Tk 387 crore to Tk 1,206 crore from Tk 819 crore because of the introduction of uniform minimum call rate, officials of telecommunications ministry have told New Age.
Considering the change in floor price and monthly average on-net, off-net and termination of voice call minutes, the leading mobile phone operator GP’s monthly revenue will increase by 54.93 per cent or Tk 218.77 crore, according to the estimation.
GP’s monthly revenue will increase to Tk 617.04 crore from Tk 398.26 crore.
Banglalink and Robi’s monthly revenue will increase by 44.45 per cent and 35.07 per cent respectively.
Banglalink’s monthly revenue will increase by Tk 97.21 crore to 315.88 crore from Tk 218.67 crore.
Besides, Robi’s revenue will increase by Tk 71.15 crore in a month to 273.99 crore from Tk 202.84 crore.
On the other hand, state-run Teletalk’s monthly revenue will decline by Tk 2 crore to Tk 18.46 crore from Tk 20.46 crore.
Asked, BTRC chairman Md Jahurul Haque, however, told New Age on Wednesday that the government set the unified call rate to check the possibility of burdening mobile phone subscribers due to the launch of mobile number portability service.
Much calculation was done before making the decision, he claimed.
Jahurul, however, admitted that customers’ cost for on-net call might increase a bit but their cost for off-net calls would decline significantly.
Ministry officials said that BTRC officials at a recent meeting with prime minister’s ICT affairs adviser Sajeeb Wazed Joy presented how the mobile operators’ revenue would increase as per different call rates.
The meeting initially decided to fix the uniform call rate at Tk 0.50, but the rate was downsized to Tk 0.45 afterwards, telecom ministry sources said.
Although the floor prices of recently scrapped voice call tariff was Tk 0.25 per minute for on-net calls and Tk 0.60 for off-net calls, the average on-net call rate was Tk 0.49 and off-net was above Tk 0.90, BTRC officials said.
In case of on-net calls at floor price, a mobile phone operator earlier earned Tk 0.25 per minute and their revenue increased by Tk 0.20 to Tk 0.45.
On the other hand, operator will have to share Tk 0.14 per minute with ICX operator and terminating operator, while they were supposed to share Tk 0.22 with ICX and terminating operator in case of off-net calls.
The operators’ per minute revenue against off-net calls, however, would decline by Tk 0.07 per minute to Tk 0.31 from Tk 0.38 as the floor price for off-net calls was also set at Tk 0.45 from Tk 0.60.
BTRC statistics shows that monthly on-net (calls in the same operator), off-net (calls in another operator) and termination (receiving calls from another operator) voice call volume by four mobile companies — Grameenphone, Banglalink, Robi and Teletalk— was 2286.90 crore minutes, 476.28 crore minutes and 486.34 crore minutes respectively.
As per the BTRC statistics, subscribers of all the three major market players — GP, Robi and Banglalink — generate majority of their calls on-net.
GP subscribers make 90 per cent of their calls on-net and the rest 10 per cent off-net.
On the other hand, 71 per cent of the calls that the Robi customers generate are on-net and 69 per cent of the calls that the Banglalink subscribers generate are on-net.
The subscribers of state-owned Teletalk, represents less than 2.5 per cent of the country’s mobile phone users, generate 15 per cent on-net calls and 85 per cent off-net calls.
After implementation of the new tariff, many subscribers have complained that their expenses for phone calls have increased significantly.
A Banglalink mobile phone subscriber told New Age that he was charged Tk 1.58 per minute (including taxes) for off-net calls after the implementation of new tariff while earlier, before the tariff was approved, he was charged Tk 0.84 (including taxes).
He also said that for on-net calls he was charged Tk 0.58 per minute after Tuesday while the charge was Tk 0.33 per minute earlier. 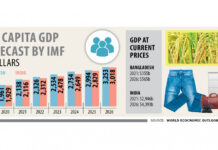