The British Marin camped here in the dead of night when people were in deep sleep. There was no human residence here back then; only lines of upward looking trees graced the vicinity. Woodcutters came during daytime, and at night, ferocious beasts prowled around. There was unrest in the city—the sepoys at the Lalbagh fort were at a point of insurgence. A few British families that were still around took refuge in green boats on the Buriganga.

Hearing the news, the members of the British Marin came and camped in this area. The place then became known as “Under Gora Maidan.” The locals called it “Anda Gorar Maidan.” At the end of one night they attacked the unarmed sepoys at the fort. The ground of Lalbagh turned red with human blood. Some of the sepoys were able to march off to Mymensingh. The captured ones were hanged on the trees of Anda Gorar Maidan.

Let everybody see—that was the idea. Let the natives realize how terrifying the punishment of treason can be. All these happened a hundred years ago—in 1958. The Maidan is still there; they call it Victoria Park. But the forest is gone. A terrible storm had flattened the forest and the trees were completely uprooted. People had nodded and said that even the trees had lives and hence could not accept such a heinous crime.

Then houses and buildings were built in the area. They made a park out of the Maidan and renamed it after the Queen Victoria. At some point, public meetings were held here. Not any more, though. In the late afternoons, young boys came to play around the place and grown-ups sat chatting while shelling nuts. It was, however, the scenario in summer or spring. During the winter the place turned desolate.

The winter this year was weird—it was hot during day-time and terribly cold at night. That morning was enveloped in winter haze. One lone cloud was gliding by slowly much lower than the usual—from the north to the south. Its colour was like frozen mist.

At that point a young man was seen walking by the side of the park, from the south to the north, to Nababpur. He was garbed in freshly laundered white and was walking fast. The bus services had begun and people were all going to work places, but this lad was surely different from them all. He also wore nice clothes had pen stuck in pocket, wrist watch, but the one difference that anybody would notice was that he had no shoes on. He was walking bare-foot

They hurled tear gas shells inside the compound of the hostel. The boys from the medical college certainly were not fools. They picked up shells before they could burst and threw those back at the police. There were some small restaurants and hotels on the other side of the road. The police took temporary shelter behind them. Some of the boys had surrounded a jeep on the road that ran by the Assembly House toward the race course. They had dragged down an MLA who was trembling like a wet crow and looking this way and that. If only the police were around!

The boys dragged him down from the jeep. One of them thrust his fist into the pocket of the man’s loose dress and tore it out. Another lad snatched away his cap and flung it on the street. The man muttered in frustration, “Ah, what are you doing, what are you doing?”

Barkat and I were standing by the mike. Barkat said abruptly, “Wait, I will be back soon.” Saying so he walked toward the gate where the boys had congregated and were shouting. The sun had reached the western sky. The cloudless sky was afire. The trees were dressed in green and spring flowers. Suddenly, there was sound of rifle firing.

I turned to look back. The skull of one boy was tearing through the air and it fell about thirty feet away. A second boy dropped on the ground. Another round of bullets was shot.

One boy covering his midriff stumbled in front of the veranda of no. 12 barrack. His eyes had a stunned look in them. Three more boys came crawling toward the place. Blood dripped from their hands.

Barkat was shot in his upper thigh. His white pajamas had become red with blood. Four of us carried him to the hospital. He was chatting with us normally. “I’m okay—it’s my thigh only. I’ll live, you’ll see. It’s nothing.”

He died that night due to hemorrhage.

It was a little before 8:00 in the evening. The golden stars twinkled in the canvas of the sky. The mists were rising. The chilly north wind had started to blow.

Salma climbed to the rooftop holding Shahed’s hand. It was a small roof. There were other people on the rooftops on other buildings too. Salma heard Mr. Razzaque talking to his wife: “Hey listen, don’t let the kids go out tomorrow. No matter what, keep them inside the house. God knows what might happen. What if they open fire on the crowd like they did last time, eh?”

It was not only Mr. Razzaque. Everybody was worried. Something was bound to happen tomorrow. Will there be bloodshed? Salma heard Mrs. Razzaque asking her husband, “How long will this go on?”

Mr. Razzaque replied, “I do not know.”

Nobody knew how much longer they would continue amid such tension. Sometimes it almost felt that they had reached a balance, that some kind of peace has been reached. But then again everything was destroyed with a deadly blow of jealousy and envy. And they wailed, “We cannot bear it anymore.”

Right at that moment, the entire city burst into in a chorus of millions of voices: All that had fallen asleep woke up asking, “What happened? Did they start shooting again?”

The sky was cloudless. Still, storm was very near.

There was no wind. Yet, there were waves of strife.

It was as if the sky was falling down. The earth trembled. It was as if a terrible earthquake shook the world around them.

Everybody understood what was happening. There was curfew on the streets. Slogans and processions were banned. Hence the students had gathered on rooftops to voice their protests. All the student halls—Muslim Hall, Medical Hostel, Dhaka Hall, Chameli House, Fazlul Huq Hall, Bandhon Kutir, Eden Hostel, Nupur Villa—everywhere students had risen and were assuring the country in one voice, “It’s my land and you do not need to be afraid.”

Shahed asked, “Didn’t you do something similar during the election last year, Apa?”

Shahed said, “So, what came out of it? The people you elected are all silent. Don’t they have a say in this?”

Salma was about to open her mouth when she heard Mr. Razzaque speaking again to his wife, “Not everyone is a Mir Zafar, you know. There are all kinds of people. It’s just that we have to recognize people for who they are.”

Sohana Manzoor is Associate Professor, Department of English & Humanities, ULAB. She is also the Editor of the Star Literature and Reviews Pages. 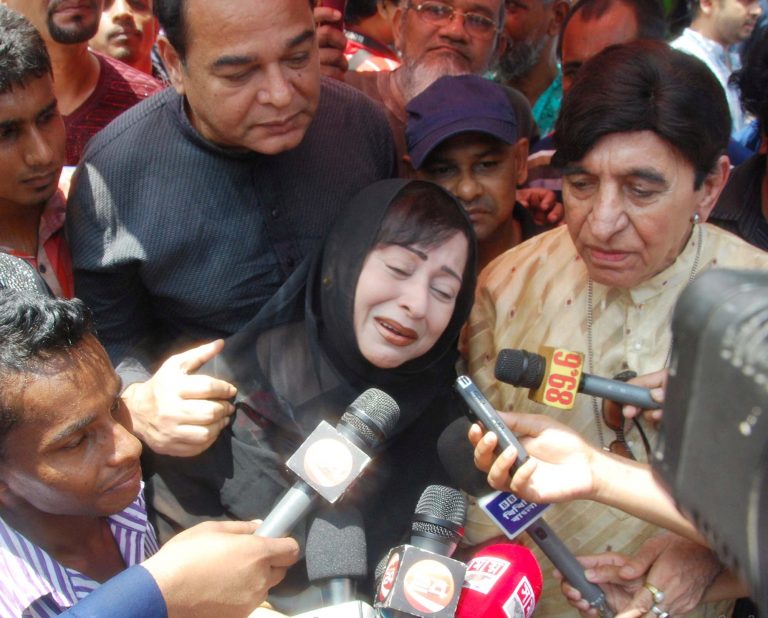