Observing that the voting was taking place in a fair manner, Chief Election Commissioner Kazi Rakibuddin Ahmad on Sunday apparently acknowledged the low voter turnout in the 10th national election.

Rakibuddin, however, said the Election Commission has instructed the law enforcement agencies to act strongly against the miscreants who were trying to deter the parliamentary elections being held in 147 constituencies.

The CEC came up with the remarks while briefing reporters at the Election Commission Media Centre in the afternoon after visiting a polling centre at Badrunnesa Women’s College in the city.

About the seemingly low voter turnout, Kazi Rakib said the matter could be explained in two ways, “One is technical preparation which is to keep everything all right so that voting could take place fairly and another is political which you all know some political parties are not participating in the election for which there would be low turnout for valid reason.”

He went on saying, “Besides, there were dense fog in north Bengal and other parts of the country in the morning when the voting started at 8:00 am. But, as the day progresses, the turnout was expected to increase with the improvement in weather and there were information of increasing turnout.”

Asked about his expectation about the turnout, Rakibuddin said there is no expectation in this regard as the matter would be cleared once the voting is over.

The CEC said he has visited one polling centre in the city where he witnessed fair voting in presence of enough members of law-enforcement agencies and election observers.

Mentioning that the close observation of the media personnel especially with their cameras is playing a supporting role for the EC, and instructions have already been given to the authorities concerned that if there is 100 votes or if anyone gets 10 votes, it will remain as the same and surely there would be no change.

Besides, he said, some polling officials were also injured by miscreants in some areas of the country and they were given necessary treatment. There was also information of some police and ansar men being attacked by the miscreants.

Asked about the alleged irregularities in the polling, Rakibuddin said all the polling activities are under the process of judicial scrutiny. “The issue does not end here as it is a judicial process, and none would be spared if there’s any irregularity.”

Apart from the Election Commission, he said, the High Court would also take action if there is any irregularity.

The CEC also noted that as the law enforcement agencies remained active at night, they have been able to resist many attacks by the miscreants in different parts of the country.

Rakibuddin said the Commission is taking into consideration each and every allegation over the polls and probing those. “However, it would be better if the allegations go directly to the presiding officers.”

He also said the presiding officers stopped polling in those centers following the due legal process which were damaged extensively by the miscreants. 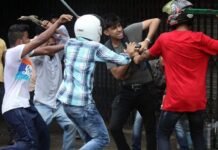 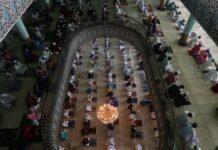 EC should take responsibility for failure in upazila polls