A potential destination of farm workers overlooked for two years 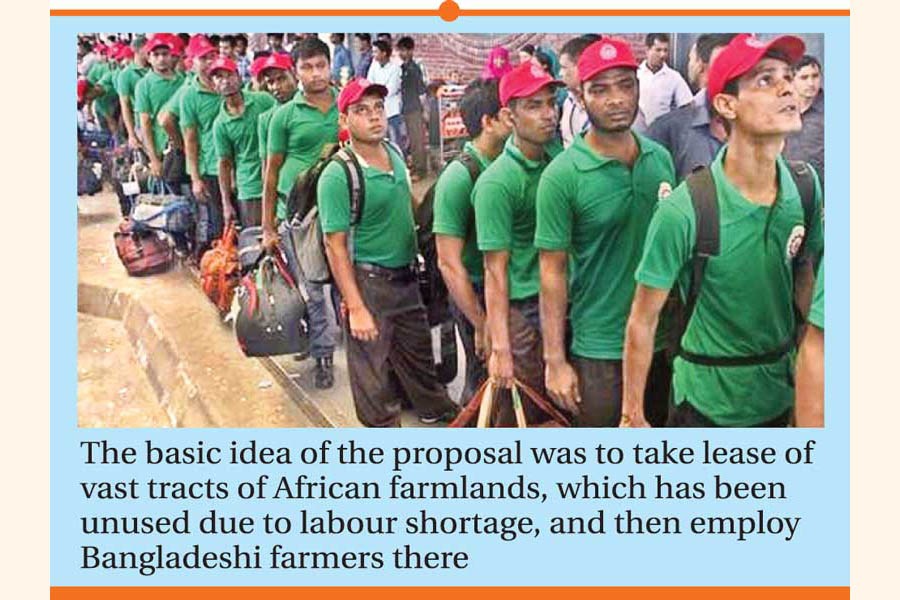 Bangladesh has now decided to resume efforts to explore job markets in Africa against the backdrop of mass deportation of foreign workers from the Middle-East (ME) countries.

Earlier, a written proposal was submitted to the government two years back to start negotiation with the African countries that have serious labour shortage, especially in farming sector. But no significant step was taken in this regard during that time.

The basic idea of the proposal was to take lease of vast tracts of African farmlands, which has been unused due to labour shortage, and then employ Bangladeshi farmers there.

“The African governments concerned had shown interest in providing lands to the Bangladeshis through contract farming,” Golam Masih, Bangladesh’s Ambassador to Saudi Arabia, who had forwarded the proposal, told the FE over phone on Tuesday.

“They had also agreed to provide 10-year visa to the Bangladeshi workers and their family members, who would be employed in those countries,” he noted.

Presently about 4.5 million Bangladeshi workers are engaged in different sectors in the Middle-East.

But a significant part of them will have to return home, as the key employers, like – Saudi Arabia, the UAE and Oman, are going to reduce the number of their foreign employees by 70 per cent by 2025, experts said.

Mr Masih further said he forwarded a proposal on the prospect of employing about 4.0 million workers in Africa, after talking with the representatives of Sudan, Tanzania, Uganda, Zambia, Tunisia and some other African countries in Riyadh.

Several meetings were held in the Prime Minister’s Office and the Bangladesh Investment Development Authority (BIDA) regarding the matter, but ultimately the proposal got put on the back burner.

It has become clear that thousands of Bangladeshis will lose their jobs in the Middle-East countries due to the change in their employment policies.

So, the government should start negotiating with the African countries, like – Sudan and Tunisia, without wasting any more time, he noted.

“When I was the Ambassador to Sudan, the then President of that country Mr Bashir had told me that Bangladesh should enter Sudan before the Pakistanis or Indians – the main competitors of the country in global job markets–do,” he commented.

“We have asked our ambassadors in the countries concerned to start discussion over the issue.”

In the wake of shrinking job markets abroad, the African countries can be a good option for Bangladeshis, he opined.

Bangladesh is fearing a 20 per cent fall in its remittance income, a key economic lifeline for the country.

Pointing to the dismal picture of the Saudi job market, Mr Masih said right at this moment about 80,000 Bangladeshis are waiting to return home, as they have no jobs.

Saudi Arabia alone has been employing about 2.2 million Bangladeshi workers who sent US$ 4.0 billion last year, and the country’s total remittance earning reached $ 18.2 billion. Remittance earnings from the UAE and Kuwait was $ 2.4 billion and $ 1.3 billion respectively.