Bangladesh Chhatra League (BCL), the student associate body of the ruling Awami League, on Saturday said it will apologise to the nation if Ganajagaran  Manch can prove that BCL men attacked their activists at Shahbagh on Friday.

“If Imran H Sarker can prove that Chhatra League attacked the Manch activists, Chattra League will apologise to the nation standing in front of the Jatiya Press Club,” said BCL president Bodiuzzaman Sohagh.

The student leader said this while addressing a press conference at Madhu’s Canteen on the Dhaka University campus.

It has become a fashion these days to involve the BCL in any misdeed, said the BCL president demanding immediate arrest of Ashraful Alam, an accused in the case for killing Rustom Ali Akandu, RU’s Shaheed Suhrawardy Hall unit Joint secretary.

“We’ll be compelled to call a countrywide strike in educational institutions across the country if Ashraful is not arrested within 24 hours,” he said.

Addressing the press conference, BCL general secretary Siddique Nazmul Alam claimed that they have no relation with Ganajagaran Manch for the last 10 months, but we’re on good terms with the students bodies involved with Ganajagaran.”

Joint secretary of BCL Shamsul Kabir Rahat, DU BCL presidentMahedi Hasan Mullah and its general secretary Umar Sharif were, among others, present at the press conference. 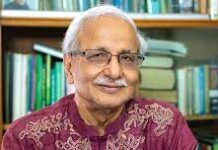