A group of students from Viqarunnisa School and College have boycotted class and held a three-hour hunger strike to demand the release of imprisoned teacher Hasna Hena.

The strike began at 10am on Sunday in front of the school’s main gate on Dhaka’s Bailey Road.

The students had initially said they would continue the hunger strike until Hasna Hena was freed, but a group of teachers came to meet with them around 1pm and broke their fast with water. They then took the students inside the school gates before another protest was announced.

The students had previously announced they would boycott class on Sunday, but the school is still conducting its annual examinations.

Class nine teacher Hasna Hena was sent to prison in a case over ‘instigating’ the suicide of student Aritry Adhikary.

According to the protesters, Hasna Hena only did what she was supposed to as a class teacher, calling the student’s guardians for a meeting with the principal. The protesters say that though she was not responsible for what happened, she became a ‘victim of circumstance’.

Unrest broke out at the renowned Dhaka school after Aritry committed suicide at her home in Shantinagar on Dec 3. Aritry’s family claim that she was caught with a mobile phone during an exam and her parents were called to a meeting with the principal, where they were ‘mistreated’, leading to her suicide.

According to the school authority, Aritry was caught cheating on the exam with a mobile phone.

A group of Viqarunnisa students and guardians launched a protest against the circumstances of Aritry’s death the day after her suicide. It continued for three days. The Ministry of Education launched an investigation into the incident and fired Hasna Hena, the school’s Acting Principal Nazneen Ferdous and the head of one of the branches of the school, Zinnat Akhtar. Their MPOs were also scrapped.

The Ministry of Education also recommended that police and RAB take legal action against them. That night police arrested Hasna Hena. Law enforcers have not moved to arrest the other two suspects in the case. 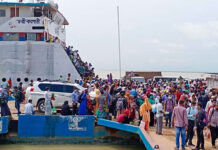 Coronavirus: Govt not extending general holidays beyond May 30 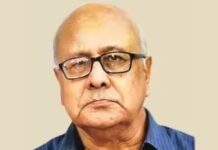 Ramna, Suhrawardy gates to be closed after 4pm on Pahela Baishakh