Bomb blasts and vandalism marked the nationwide daylong hartal, enforced by the BNP-led 18-party alliance on Sunday demanding the restoration of caretaker government system, release of its arrested leaders and activists and withdrawal of ban on meetings and processions.

No major incident of violence was reported from anywhere during the hartal hours. Pickets vandalised more than 25 vehicles in different parts of the country, according to reports reached the UNB news desk.

In the capital, pro-hartal pickets exploded at least 20 crude bombs at Adabar in Mohammadpur, Gabtoli, Tejgaon, Shahbagh and Uttara areas.

A source at the Dhaka Metropolitan Police (DMP) said police arrested two people during the shutdown on charge of picketing. Later, a mobile court sentenced the two to different terms in jail.

Police dispersed the hartal supporters in Adabar area around at 8 am after they brought out a procession there. Seven crude bombs were set off at that time.

Witnesses said there were incidents of chase and counter-chase between police and hartal supporters in Tejgaon, Mohammadpur, Malibagh, Moghbazar, Rampura, Shahbagh and Panthapath areas. Pro-hartal elements also hurled brickbats at the law enforcers during the chases.

In Sangsad Bhaban area, BNP lawmakers took out a procession in support of the hartal and later held a rally there in the morning.

Pickets vandalised several vehicles in different parts of the city, including Panthapath area. They also torched a covered van at Khilgaon Taltola around.

There was no significant presence of hartal supporters in front of the BNP’s Nayapaltan headquarters during the shutdown.

Rickshaws and auto-rickshaws ruled the city streets as motorised vehicles largely stayed off the roads during the first hours of the hartal. However, the number of buses and minibuses started increasing as the day went on.

No long-route buses left the capital’s Mohakhali, Sayedabad and Gabtoli terminals for their destinations outside the capital. But train communications across the country remained normal.

In the morning, BNP Chairperson Khaleda Zia’s adviser Shamsuzzaman Dudu briefed the press at the party’s cental office and demanded restoration of the caretaker government system to ensure a free, fair and credible election.

Later in the day, Dudu at a post-hartal press-conference at the party’s Nayapaltan central office in the capital claimed that law enforcers arrested a total of 111 opposition leaders and activists across the country over the shutdown.

Mobile Court also sentenced two opposition men to 15 days in jail, he said adding that over 201 of their leaders and activists were injured during the shutdown.

In Narayanganj, at least 10 people were injured in a clash between hartal supporters and police in the town. Pickets vandalised a bus of BRTC (Bangladesh Road Transport Corporation), a pick-up van and human-hauler.

In Chittagong, pickets vandalised two CNG-run auto rickshaws and a bus in the city’s Wasa intersection and Tiger Pass areas.

In Borguna, police arrested 10 people during the hartal hours on charge of committing sabotage. 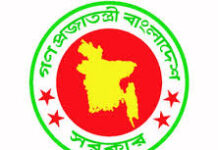 Action to be taken if its directives ignored, DGHS warns