Thousands of students in Hong Kong have converged on a university campus to begin a week-long boycott of classes.

They are protesting against China’s stance on electoral reform in the territory. Students from more than two dozen institutions are taking part.

It is a prelude to a larger protest on 1 October planned by pro-democracy group Occupy Central.

The boycott saw thousands of students gathering at 14:00 local time (07:00 BST) for a sit-in at the Chinese University of Hong Kong campus in Sha Tin, several kilometres north of the city centre.

Most are wearing white T-shirts with yellow ribbons – a colour adopted by pro-democracy activists.

A guide to the Occupy Central movement

The boycott is being organised by groups such as the Hong Kong Federation of Students and Scholarism.

Student activists are also organising a series of rallies and public lectures in a park near government offices later in the week.

RTHK reported that teenage activists were standing outside secondary schools early on Monday morning, distributing yellow ribbons to students arriving for class and urging them to join the boycott.

About 400 academics and non-teaching staff are also taking part in support of the students, according to the South China Morning Post. 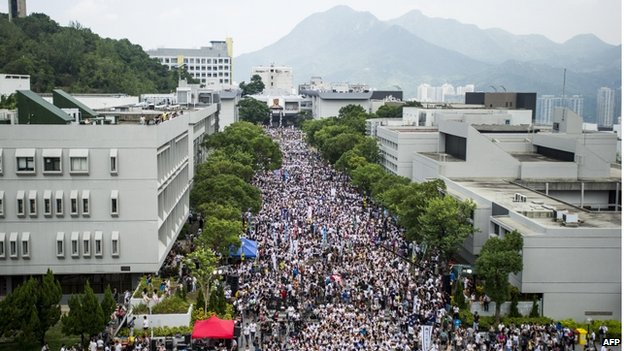 The Hong Kong Federation of Students said that about 13,000 students had gathered for the start of the boycott. The mood was defiant.

The last time students in Hong Kong engaged in such a large-scale protest was in 2012, when they successfully argued against the implementation of national and moral education, which some critics said was a form of brainwashing.

Two years ago, the Hong Kong government gave in. But this time, the main target of their strike, the Chinese government in Beijing, is unlikely to be as accommodating.

The students also sent a letter to the current chief executive CY Leung, blaming him, in part, for Beijing’s tough requirements for election candidates.

They said Mr Leung had “no excuse” for absolving himself from the proposal announced by the Chinese government. 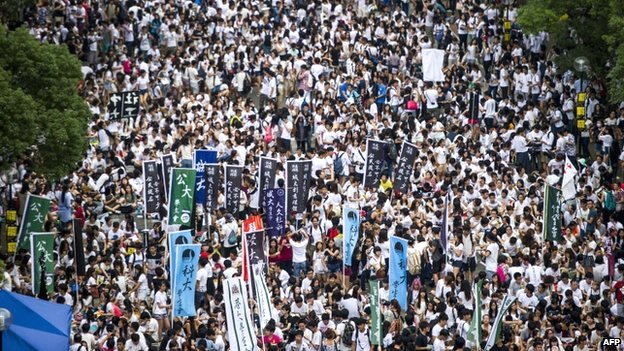 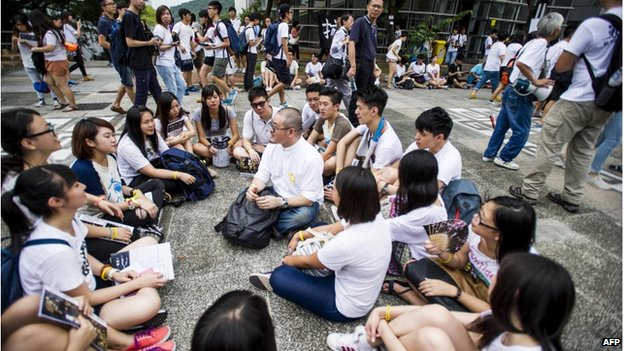 A larger pro-democracy protest is due to take place next month. Occupy Central has pledged to stage a sit-in at Hong Kong’s financial district, which critics have said may shut down the area.

The issue of how Hong Kong can choose its leader gripped the city in recent months, sparking protests from both the pro-democracy and pro-Beijing camps.

The Chinese government has promised direct elections for Hong Kong’s leader, the chief executive, by 2017.

But in August, it ruled that voters would only have a choice from a list of two or three candidates selected by a nominating committee.

Democracy activists say China will use this committee to screen out candidates it disapproves of.

The protesting students say Beijing’s decision does not amount to the greater democracy Hong Kong was promised when it was handed back from Britain to China in 1997.

But the BBC’s China editor Carrie Gracie says the communist leadership in Beijing is turning firmly against ideas of political reform at home and has no interest in encouraging noisy critics. 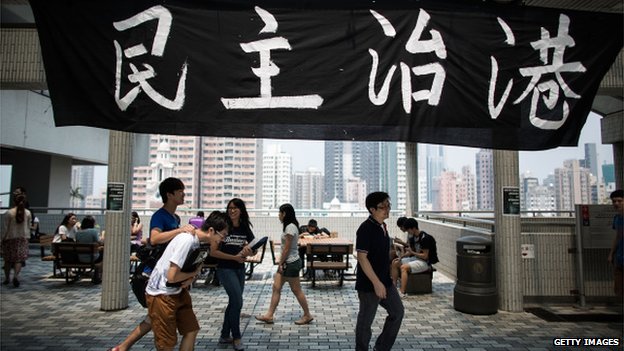 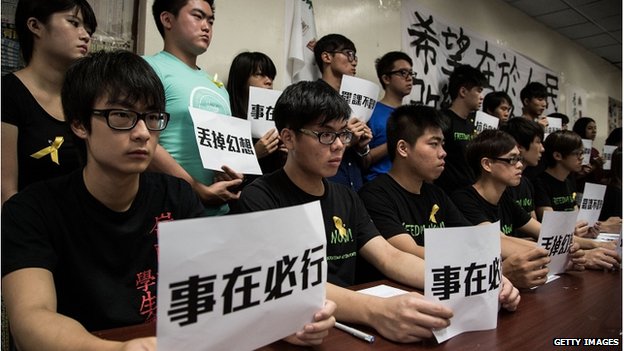